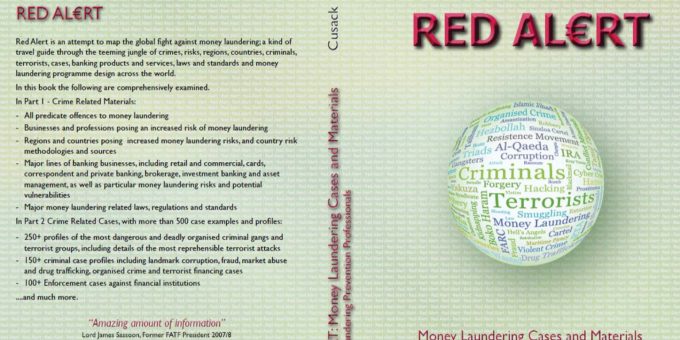 Firm asset seizure targets could be set with regards to the proceeds of crime. At least 5% of criminal proceeds, approx US$100bio should be the medium term goal (e.g. after 5 years). In order to achieve this, enforcement authorities will need to invest additional resources to investigate the information provided from reports already filed by financial institutions that should be a road map for prosecuting many more criminals and seizing criminal assets. As a start, public resources directly employed to these tasks should match at least those invested by the private sector and results should be published.

A detailed study of the problems faced and the impediments to success and recommendations to improve asset seizure and forfeiture in the system was conducted by Matrix Insight and released in July 2009, following a request by the European Commission. These recommendations should be acted upon.

FATF’s 2012 Best Practices on Confiscation and a Framework for Ongoing Work or Asset Recovery and the EU’s proposed Directive on freezing and confiscation of the proceeds of crime are a start but by themselves will make little impact and will not address the problem.

The introduction of new Regulations concerning AML largely falls upon financial institutions, and within FIs on Banks. Non-Bank FIs and non-FIs identified as presenting real risks should accept greater responsibility and increase their contributions to match those of the Banks. The Banks should not be expected to provide assurance where regulation is required on third parties.

New regulations are targeted at perceived gaps or perceived risk areas in the money laundering frameworks rather than on any assessment or threshold test, for example a cost benefit or effectiveness test before introduction. In many cases it is unclear whether proposed changes will have any material affect on the underlying levels of crime or criminal proceeds and yet the costs of introduction and compliance are largely ignored.

Regulations are also introduced across jurisdictions often inconsistently. The complexity of trying to comply with international best practices and at the same time national regulations can create confusion, drive up unnecessarily compliance costs and raise complexity. Financial institutions operating globally should be entitled to rely on internationally accepted standards, recognising that such standards may have an element of gold plating.

For core issues, such as, without limitation, (i) the definition of “Customer” (ii) the definition of “beneficial ownership” and definitions such as (iii) PEPs, (iv) wire transfer standards and (v) agreement over types of and approaches towards non-FIs that should be regulated designated entities, these should be universally consistent.

Recommendation 3 – Information on Risks and Threats must be shared and communicated.

street; governments should share information with financial institutions. However, after years of lip service, governmental authorities have made little progress. If governments want to promote successful collaboration to combat financial crime and achieve more impressive results, they must entrust financial institutions with more information. A robust National Risk and Threat Assessment identifying and prioritising risks and threats honestly is essential as well as identifying where FIs can and should provide assistance. Furthermore, financial institutions should be able to maintain appropriate records, share certain information amongst themselves and across borders, without any conflict with applicable data protection or other laws or regulations. This need not include any individual SAR filing made in another country, though the underlying case facts and details should be included.

Additionally, clear priorities should be set and announced as to the relative importance and targets of effort. As all agree that actions to be taken are inevitably risk-based, i.e. the areas that present the greatest risk should receive the greatest attention, this is impossible without specific information from governments on their priorities. Currently, because of this lack of information, financial institutions find themselves in a difficult situation and regulators seem unwilling to offer any guidance or safe harbours. If the government doesn’t set priorities, or says that everything is a priority – which amounts to the same thing – then financial institutions cannot accurately assess their risks or concentrate their compliance efforts on those areas that pose the greatest risk, and regulators cannot focus their examination and enforcement efforts on those areas either.

If priorities are set and clearly communicated then banks can and will translate the government’s priorities into compliance systems across their mix of products and services, assessing the risks that their various business lines present and designing compliance systems that address those risks.

At the same time, regulators will design examination and enforcement protocols designed to ensure that banks have in place procedures that will adequately identify and control the risks associated with money laundering and terrorist financing. But in order to have a risk-based system, banks must know which crimes or similar activities should be given the highest attention and how regulators will approach Banks judgements in this respect. Absent this information, the result is likely to be in many cases unfocused compliance that tries to catch everything and winds up missing too much of the things that are most important.

Based on harms and threats it would appear reasonable to assume that terrorism finance and WMD proliferation finance are indeed major priorities for many governments, though again, these should be expressly confirmed and remaining priorities enunciated. Based on the amounts of criminal monies derived, there is a case for considering that Counterfeiting and Piracy should increase in priority. Other priorities for inclusion will likely include, Corruption (kleptocracy); Fraud (specific elements, for example VAT Tax Fraud, Cybercrime); Illegal Gambling; Drug Trafficking; Human Trafficking and Smuggling which together make up to 95% of likely criminal proceeds.

For each, tailored strategies should be developed and the existing one size fits all, with excessive reliance on financial institutions, KYC, Monitoring and SAR filing should be reconsidered.

Financial institutions must focus on preventing and detecting criminal proceeds, as well as implementing applicable AML Laws and Regulations and ensuring an institutional “culture of compliance” exists which emphasises the important role banks play in maintaining the integrity of the international financial system, national security and corporate social responsibility. Financial institutions should be encouraged to adopt a “risk based approach”, in their design and implementation of AML programmes and should not be second guessed provided such programmes are reasonable and proportionate and ultimately reasonably effective, particularly absent published regulatory specificity.

Contributions by financial institutions should be recognised and where appropriate taken into account when assessing an institution’s record particularly before imposing fines and penalties. Banks should be encouraged to treat AML compliance costs differently than regular business expenses (e.g., facilities costs) and more like important capital investments that promote profitability and critical public goods.

Banks that routinely dedicate resources to efficient and effective compliance should be given direct economic benefits – reduction of examination fees and other supervisory assessments, consideration in calculating capital, or tax advantages.

Someone must educate the public about the true cost of money laundering and how money laundering plays a fundamental role in facilitating the drug trafficker, the organised criminal, the fraudster and the terrorist. Money laundering is not a victimless crime. Whilst it does not have the trauma of a robbery or produce the damage resulting from violent crime, money laundering can only take place after a predicate crime (such as robbery or drug dealing) has taken place. Reinforcing the clear link may also persuade and incentivise otherwise law abiding citizens of the consequences of paying for counterfeit or smuggled goods, use of economic migrants as cheap labour, prostitution, drug taking or involvement in illegal gambling. The economics of crime are no different from the economics of trade and reducing demand will have just as much an impact as disrupting supply.

Financial institutions operate on the front line on the right side of a just war on the proceeds of crime, on a battlefield that is constantly changing, against an enemy who remains cunning, elusive and very well resourced, without being provided with much useful intelligence and in constant concern over the risk of friendly fire. This is no way to win a war!

The battle is not yet lost and we have plenty of fight left in us, so let us join once more to address the weaknesses in the strategy and to try to work ever more closely together as banks, regulators, policy makers, law enforcement and governments focusing on the common enemy, criminals and proceeds of their crimes.

Impressive how John has summarized the most pressing issues almost ten years ago, depressing how little has happened since despite his concrete proposals for improvement. While most is still very valid today an updated revision would be helpful for another attempt on progress.