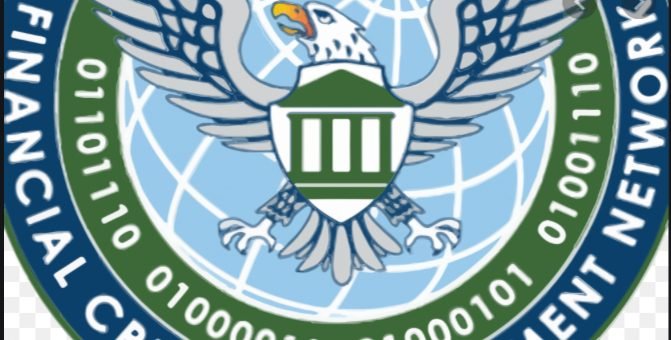 The unauthorised disclosure of a single SAR in the US carries civil and criminal penalties, which include up to five years in prison and a US$250,000 fine. Natalie Edwards, a former FinCEN employee, thought to be responsible for releasing 2,500 confidential documents and more than 2,100 SAR’s that were likely of the highest value was arrested in October 2018 and had pleaded guilty to one count of unauthorised disclosure of SAR data, with sentencing expected this week but now pushed back to January, 2021. Edwards,  a senior adviser to the Head of the Intelligence Division at FinCEN, who had high security clearances, and made US$160,000 a year, leaked a treasure trove of information to a Buzzfeed journalist, Jason Leopold, who with Anthony Cormier and others, published articles based on confidential information disclosed by Edwards from October 2017. Leopold & Cormier were covering what they called the Money Trail: Trump, his business dealings and any links to Russia.

The information the journalists got from Edwards in October 2017 enabled them to publish their first article based on confidential SAR data from the FinCEN employee, reporting suspicious financial transactions for Paul Manafort, President Trumps campaign manager in 2016. The reporting a day ahead of Manafort’s arrest by the FBI, in connection with the Mueller Inquiry into Russian Interference in the US Presidential Election, was a scoop, which headlined as “These 13 Wire Transfers Are A Focus Of The FBI Probe Into Paul Manafort.” This article included reporting that “BuzzFeed News has learned that investigators have been scrutinising at least 13 wire transfers between 2012 and 2013. The transfers were first flagged by US financial institutions, which are required by law to tell an office within the Treasury Department about any transactions they deem suspicious.“ –

Further SAR disclosures from Edwards over the next 12 months provided the substance for 12 published articles on Manafort and Russian related suspicious transactions. To anyone with any knowledge of the SAR’s regime, brazenly and openly reporting on information from SAR’s is likely to result in an immediate investigation by the US Government to identify the source. 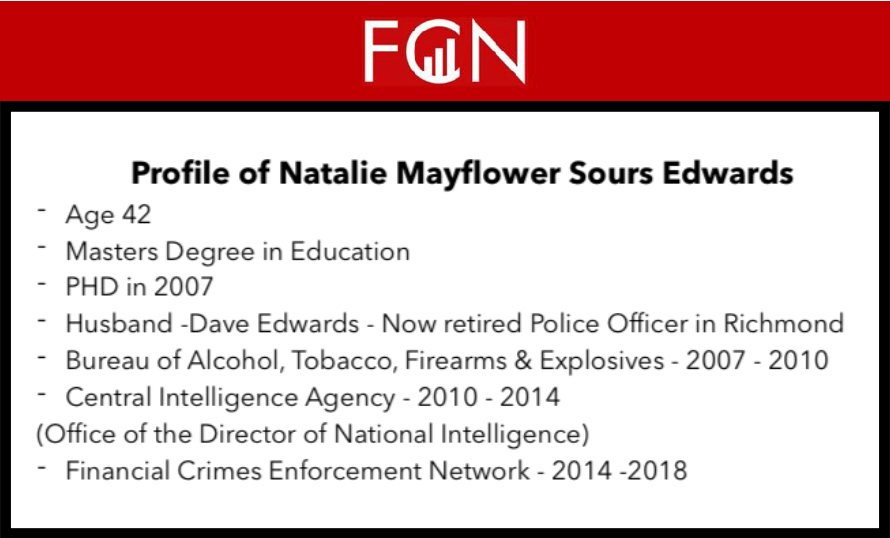 Edwards was caught after the FBI obtained a warrant to tap her cellphone on 1st August 2018, and were subsequently able to identify hundreds of messages from her cellphone to the so called “Reporter 1”, who was identified by prosecutors by listing the published articles cited in court documents which were written by Jason Leopold. This was not before Edwards was for example able to disclose another batch of 1,500 SAR’s on or about September 1st, 2018.

According to Edwards’ lawyer, Jason Leopold encouraged Edwards to provide the documents to him, and that throughout 2017 & 2018, Leopold told Edwards in WhatsApp conversations that he was committed to her cause of uncovering concerns she had about actions in the US Treasury Department, having already written an article on 6th October, 2017 Headlined “This is Domestic Spying,” with information obtained from Edwards. This complaint which she raised internally was not upheld and appears to be the catalyst to Edwards leaking confidential information. Also according to her court filing, she  “grew to question,” whether FinCEN was providing complete information to Congress in response to requests for information, in connection with the Russia investigation.

The disclosure of highly confidential information was all too easily achieved. Edwards had by the nature of her role at FinCEN, access to SAR and other confidential data. She reportedly transferred these to a FinCEN flash drive, took photographs of the documents, and then texted the photographs to Leopold on the WhatsApp platform. At the time of her arrest, Edwards was found to be in possession of a flash drive on which the disclosed SARs were saved. A personal cellphone containing numerous communications in which she transmitted SARs and other sensitive government information to Leopold was also found.

What would only become clear later though was that in addition to providing Buzzfeed journalists with information in connection with the Russia investigation, Edwards would provide the information which would lead to Buzzfeed & the International Consortium of International Journalists publishing the “FinCEN Files” on 20 September, 2020. These leaks revealed more than 2,500 documents including more than 2,100 SAR’s and suggesting up to US$2 trillion in potentially suspicious transactions, and not just relating to Russia.

In a Buzzfeed podcast, with Jason Leopold, he talks about how he felt having information that gave him and Comier their original scoop. He said that ”back in 2017 when I started at BuzzFeed, I was watching all of these news outlets, our competitors – like the New York Times, the Washington Post, CNN – break stories. And I am so fiercely competitive that I wanted to break those stories, too. And it brought me to a place where one day I was able to say, I got everything that I need. You know and everything that I need to report what we’re now reporting. The day that I finally had the records was a pretty awesome day. It was an awesome day and just this like amazing feeling of just … euphoria.” He also revealed what motivates him. “I love the rush. I love the rush of breaking news, of breaking a story, of being first. It was very much like cocaine to me. Which I also used to love.” 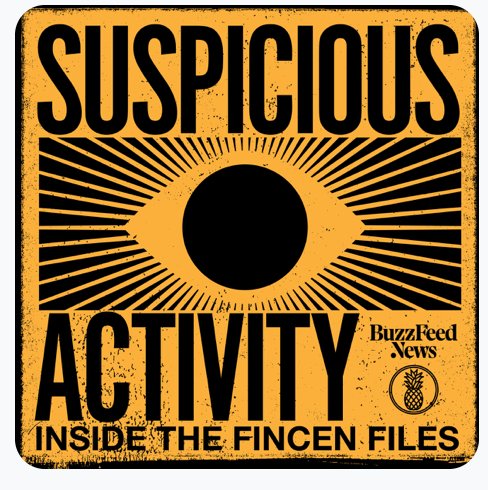 Whilst Leopold has never revealed his source, citing journalistic integrity, his co authored reports nevertheless led investigators to FinCEN and so to Edwards, who has since apologised to the court, has lost her job, her reputation and whilst due to be originally sentenced today will hear her fate early next year.

Whilst the Government is looking for as tough a sentence as possible, Edwards’ lawyers are hoping for no jail time, to go with the under US$10,000 fine levied back in January 2020.

FinCEN released a statement on September 1, 2020 stating that, “the unauthorised disclosure of SARs is a crime that can impact the national security of the United States, compromise law enforcement investigations, and threaten the safety and security of the institutions and individuals who file such reports.

A letter from FinCEN Director Kenneth Blanco submitted to the court said Edwards’ disclosures have impaired the intelligence center’s operations and hurt its ability to get information from banks and other financial providers. “Domestic and international law enforcement efforts to combat money laundering, the financing of terrorism, and other illicit activity have been undermined,” Blanco wrote. “There has been a chilling effect on the financial sector’s willingness to comply with its BSA reporting and compliance requirements in a fulsome and candid manner.” For more SEE: US v Sours Edwards SDNY 19CR00064 FinCEN FIles Leaks Govt Sentencing Memo & edwardsredactedsentencing-submissionic

In pushing back sentencing, we will now have to wait to see whether a US judge takes the largest intentional breach in SAR data security and violation of law on a grand scale as a serious crime or a misdemeanour.

It is to be hoped that Jason Leopold, his Buzzfeed colleagues and ICIJ colleagues, will spare a thought for Edwards as her freedom is being decided, after all by doing what she did, for whatever the reasons, she gave them the biggest scoops of their careers, and its unlikely she will get a sympathetic hearing from anyone else, beyond her family and friends.

And here is a final thought. If, in fact, the release of more than 2,100 confidential SARs to the media is justified (on the basis that not enough was being done after these SARs were filed), then it’s interesting that the first story that ran (based on confidential SAR data) was to get a scoop a single day ahead of the unsealing of the indictment and arrest of Paul Manafort and others, not least that investigations into his activities had been the subject of Bank filed SAR’s filed years before. 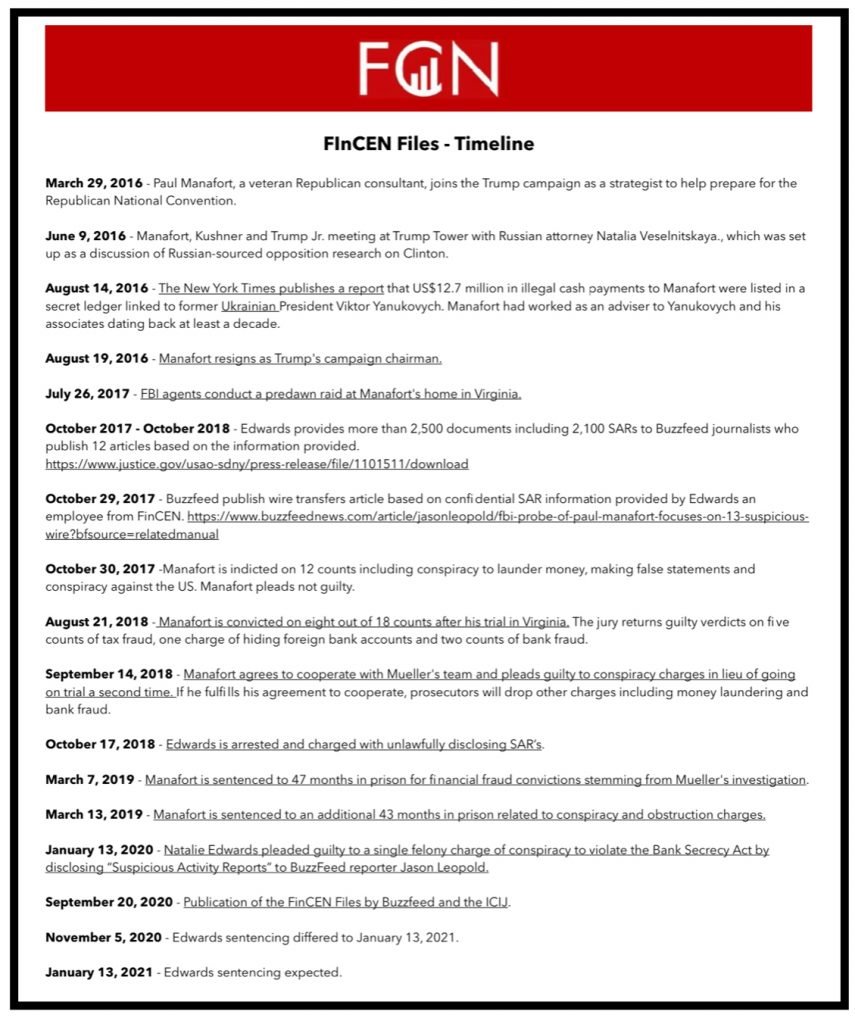 CITES Meets in Geneva – Wildlife at Risk
Governments, Trade Associations and NGO’s are meeting to talk trade and conservation with concerns around...

Islamic State of Iraq & Syria (ISIS/Daesh) – Intelligence Briefing by FCN
The following is a summary of the rise and fall of the Islamic State (IS),...