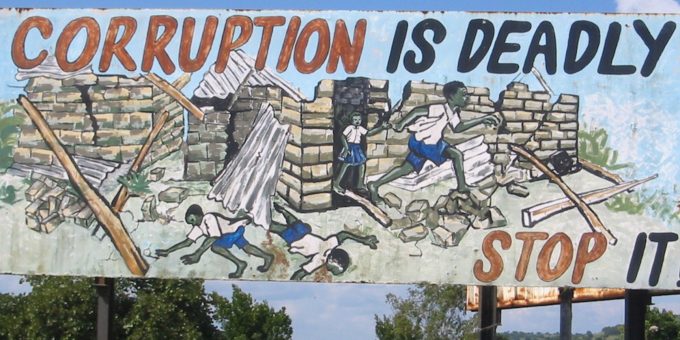 Traditional African societies educated their young using folklore. By exploring folklore further, it may offer Africa insight into its corruption problems. Storytelling, has a long tradition in African societies, and has become a common medium of learning. Take the story of the tortoise and the lizard. A companion of animals were undertaking an arduous journey, sharing the load and duties. A meal was prepared for all, but before all the animals could take their share, the tortoise gobbled it up, cheating the others of their food. When they realised their meal had been eaten, the other animals deputised one of their travel companions, the lizard, to investigate and report back. As the lizard investigated he quickly suspected the satiated tortoise. However, the lizard was by now very hungry, and having still a long trek ahead, succumbed to an offer from the tortoise to eat some of his food. The tortoise knew that feeding the lizard, might confirm the lizard’s opinion of him but he also surmised it might also tempt the lizard to keep quiet. To ensure the lizard’s silence though, the tortoise went further and added a large bone to the meal and the lizard in its eagerness to eat swallowed the bone. The large bone became immediately stuck in the lizard’s throat, rendering it speechless, such that it could only nod and couldn’t tell anyone else of the tortoise’s actions.

In his 2008 paper, John Hooker of Carnegie Mellon University argued that because cultures operate in very different ways, different activities are corrupting in different parts of the world. He noted that “bribery, kickbacks, cronyism, and nepotism seem to be more prevalent in some parts of the world… Is it because some peoples are less ethical than others? Or is it because they have different ethical systems and regard these behaviours as acceptable?” In many parts of the world, including Africa, we have norms where we welcome visitors and show condolence or appreciation with gifts. Also, we generally prefer to conduct business with those we trust, which means business is preferred with known relationships and by referrals. For example, a purchasing officer is likely to be offered gifts. Will a gift from a winning bidder, after the award of a contract, be a bribe; and what about from a bidder that is known to the officer through family or other relationships? Very probably, but rejecting the gift is also in some senses against societal norms.

When Goodluck Jonathan, former President of Nigeria, said “stealing is not corruption”, his critics railed against him. His comment revealed the general African struggle with understanding ‘corruption.’ Africans understand stealing all too well, and know what the tortoise did was wrong and that he should be punished. Yet corruption thrives in much of Africa, maybe because the people generally consider anti-corruption requirements as ‘foreign rules’ to which they are expected to nod like the lizard. Tortoises live not just in Africa, but in all parts of the world. However, it’s Africa’s People who are defamed, even when the tortoise has a paler shell. Like the lizard, Africa swallows the bone and gets the attention. It gets the bad press while others benefit.

Africa should stop accepting tainted food from any tortoises, and takes more care over who prepares and safeguards the food. Africa has a history of traditions, cultures, ethos and ethics. In addition to the right legal frameworks, it should also shape public perception of corruption, itself through strong African voices with these elements of its heritage.

Thank you for this article. You are absolutely correct to point out that, in general, African social structures are based around extended families and tribal loyalties. As you will know, it is also normal to bring gifts for both small and large things: gifts of food when visiting a home and gifts to honour and demonstrate loyalty to a paramount chief for example. In many places, trying to do any kind of business without such gifts would be considered to be both foolish and insulting. Anyone who has tried to set up a business in a society where ‘gifts’ are… Read more »