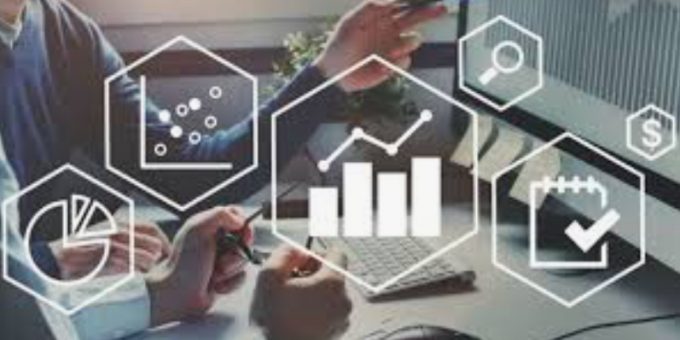 The fight against financial crime remains a hot topic with current levels of effectiveness questioned by all sides. That no one is doing well or well enough is widely accepted, but that some are achieving success and in which areas is less transparent.

Following comprehensive country assessments of up to 50-100 pages each carried out by anti financial crime experts for Financial Crime News, which include referencing hundreds of relevant sources, it’s now possible to compare and contrast where these countries are doing well relatively speaking and where areas to improve are needed, beyond simply comparing FATF scores. The countries that were part of this initial study group are Australia, France, Germany, Hong Kong, Ireland, Italy, Japan, Spain, UAE & the UK. These 10 countries together represent approx 25% of FATF members, are home to approx 470 million people, make up 20% of Global GDP and are exposed to laundering at least approx US$400-500 billion a year. Whilst 8 of these countries have been through their FATF 4th round mutual evaluations and many are working on action plans to improve effectiveness, France & Germany have yet to have their assessments finalised. 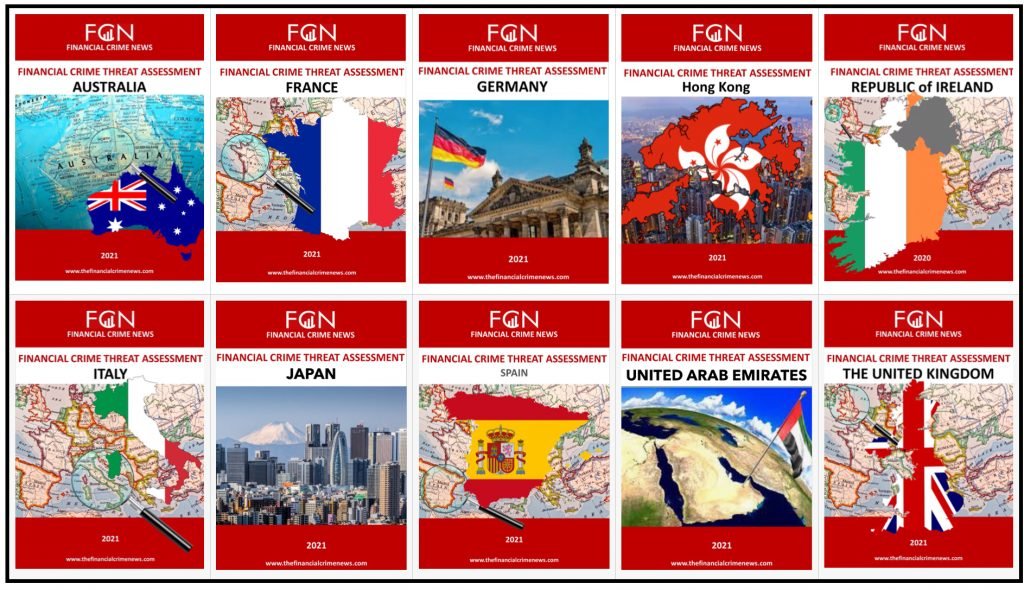 Country Threat Assessments can be found and accessed across the Financial Crime News Platform.

Whilst the data allows for measurements and comparisons for 40 Metrics these have been summarised into 11 Key Findings. These are:

2– Despite identification as FATF priority areas: People Smuggling is a main threat only in 2/10 (Australia & UK) & Environmental Crimes only in 2/10  (Illegal Wildlife Trade in UK & Illegal Waste Trafficking in Italy).

3 – External indicators suggest 3/10 may locally underestimate the risk (Tax in Japan & UAE & TF in UK as under rated).

4 – Banks, FIs and MSBs are the most common sectors identified as most vulnerable to ML. This is then followed by Professional Enablers (lawyers accountants TCSP etc) in 8/10 (not incl France & Germany); Real Estate in 7/10 (not incl Australia, Hong Kong & Ireland); & High Value Goods Dealers in 6/10 (France, Ireland, Italy (Gold) & Japan). Also included is Gambling (Australia & Germany).

5 – Despite identification as a FATF priority sector of concern virtual currency is rated as having a high vulnerability to ML in only 1/10 (Japan).

8 – Published results from FATF 4th round MER (France & Germany not yet available), highlight significant room for improvement, with no one country doing well enough, particularly on effectiveness (Immediate Outcomes), though Ireland, Spain & UK produced the best results. Spain was the only country to score well for IO3 Supervision (SE) & IO4 Preventative Measures (SE), with Ireland the only other country registering a positive result for IO3 (SE). Hong Kong, Italy & Spain were the only countries to score positively for IO6 FIU & IO8 Confiscations, with Australia, Ireland & Japan having positive outcomes for IO5 FIU & UK for IO8 Confiscations. No supervisors have yet fully adopted a risk based approach to supervision embracing a balanced scorecard approach remaining focussed principally still on technical compliance. Australia is the only country not to have published a comprehensive NRA (excluding sectors). Note UAEs NRA is not public.

10 – Asset recoveries are generally very low, with Italy the exception. (US$11 billion in 2019), compared to Australia, France, Spain & UK (approx US$175 – 250 million). Asset recoveries to estimated criminal proceeds (using the lowest estimated figure) at less than 1% for all except Italy (up to 47%), with most below 0.5%. 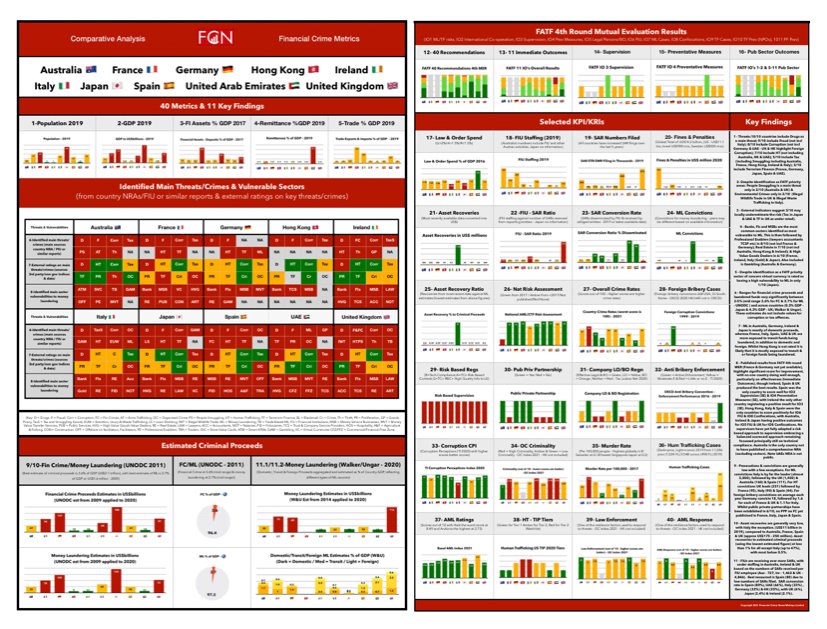 Through this comparative analysis, a number of standout positive outcomes can be identified, albeit often in relative terms, though these better outcomes demonstrate these can be achieved and lessons can be learned and better practices shared so that countries that did less well can consider whether additional actions could lead to similar outcomes achieved elsewhere. What is interesting, though perhaps not surprising is that countries often achieve positive outcomes in a few distinct areas and that these are spread right across the countries assessed. Highlights from this comparative study suggest countries have achieved better results as follows:

This comparative study begins to show policy makers and others the relative differences using key metrics based on the best available data for country performances in effectively fighting financial crime. Not all data is as robust or as up to date as we’d like but it’s the best we have, for now. Additional metrics can certainly be considered but those where data doesn’t yet exist need to be identified and information gathered.

This also provides a template for country action plans as basic as designing and implementing actions to go from Red to Amber and from Amber to Green. It can be achieved, because somewhere someone has already shown it can be done.