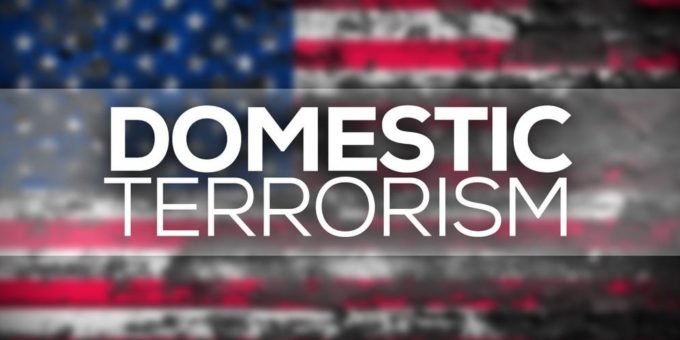 Since 9/11 no foreign terrorist organization has completed an attack in the United States, however many attacks have been carried out by domestic terrorists. In terms of the number of people killed, the largest attacks were at a nightclub in Orlando, Florida (49 dead), a community centre in San Bernardino, California (14 dead), a military base in Fort Hood, Texas (13 dead), a Pittsburg, PA synagogue (11 dead), a church in Charleston, South Carolina (9 dead), and a store in El Paso, Texas (23 dead). Foreign terrorists inspired the individuals responsible for the attacks in Orlando, San Bernardino and Fort Hood, but these individuals operated independently, so the events are considered homegrown rather than foreign terrorist attacks by the FBI. The terrorists at the Pittsburg synagogue, Charleston church and at the store in El Paso were motivated by racism and are therefore classified by the FBI as domestic terrorists. 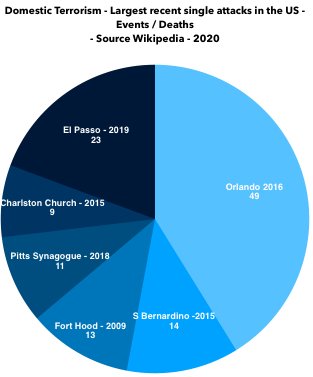 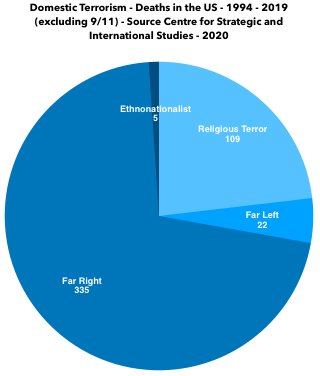 The association between domestic terrorism and racism finds support in a recent government review. The Department of Homeland Security’s just released first annual Terrorist Threat Assessment finds that the overwhelming number of attacks since 2018 have been by so called white supremacists. According to their data, 2019 was the most deadly year for domestic terrorism since the Oklahoma City bombing in 1995 (2020 was excluded, as the data is still under review). In 2019, alone, they found that white supremacists were responsible for 8 of 16 attacks and 39 of the 48 resulting deaths.

Of the six most deadly attacks since 9/11, all but one were conducted by single individuals. The only exception was the San Bernardino shooting, committed by a husband and wife.

In this context, the recent arrest of 14 people who were planning to kidnap Gretchen Whitmer, the governor of Michigan, put her on trial, and take over the state government by force, represents an alarming escalation in organisational capacity and goals by domestic terrorists.

It is no wonder then that public concern about domestic terrorism has also increased. In the final days leading up to the US 2020 federal election, a poll found that three-quarters of Americans were “very” or “quite” concerned about post-election violence and this was consistent among supporters of both presidential candidates.

The House of Representatives Committee on Oversight and Reform in June 2019 found that, despite an increase of over 40% in domestic terrorism, 80% of FBI resources were concentrated on foreign-related terrorists with only 20% on domestic attacks. Resources roughly matched effectiveness: the FBI was more successful in stopping foreign inspired terrorists, blocking 70% of the attacks from Islamic related terrorists, and less successful at home, preventing only 29% of white extremist terrorist attacks.

The focus of other US government agencies involved in the detection and financing of terrorism has been primarily on homegrown terrorists and their foreign links to the exclusion of domestic terrorists.

The 2018 National Terrorist Financing Risk Assessment (NTFRA), issued by the US Department of the Treasury (which is updated every three years), concludes that the most common type of terrorist financing involves US-based individuals sending funds to foreign terrorist organisations.

The NTFRA’s review of homegrown terrorists has some insights that might be valuable to financial institutions in creating red flags for purely domestic terrorism. For example, the report highlights the small the size of the funds collected and sent abroad by homegrown terrorists: transactions were generally below the US$3,000 threshold for collecting customer information, and often in the hundreds of dollars. The report also noted that most money service businesses collected customer information below the required threshold, and that this was essential, as 94% of SARS from MSBs on individuals who were charged with supporting terrorism were for less than US$800. Funds used in planning and executing terrorist attacks are widely known to often run below the detection thresholds of FI’s, with three quarters costing less than US$10,000 and domestic terrorism has lower transportation and communication costs than international terrorism, and fewer barriers to the use of cash.

For example, while advisories cover foreign directed terrorism, there is no FinCEN advisory on domestic terrorism threats. Nor does the US Government generate an official or public list of domestic terrorist organisations or individuals.

Despite the lack of guidance, some leading US based financial institutions have taken their own initiatives in the area of stereotype formation, trying to ensure that they are not misguided in forming incorrect biases in the potential identification of domestic terrorists among their customers or counter parties. These FI’s are focused on customers where bank and external information indicates a higher propensity of potential terrorism, using data-driven detection in order to steer clear of pre-existing biases in looking for potential domestic as well as homegrown foreign inspired actors. These steps seem warranted as the classic stereotypes of domestic terrorists are rarely accurate.

The stereotype white supremacist, for example, depicted through the media as coming from an impoverished, uneducated demographic from middle America is just that. In fact members of these groups come from New York, California and all places in between. They come from small towns, major cities, the military, and even from academia. Nor are all uneducated or poor: a female New Jersey judge was attacked at home in July and her son killed, by an anti-feminist lawyer aged 76 who had previously argued a case before her. As for age, it is widely reported that young white men are targeted for radicalisation, as well as being more likely to become potential perpetrators. In both the El Paso and the Charlottesville shootings the terrorists were both aged 21, but the ages of those carrying out the attack in the Pittsburg synagogue and the attack on the Republican congressmen playing baseball were 48 and 66 respectively.

If any common traits exist, they seem to involve race, gender, and ideology, not income, education, urban/rural trends, or age. Most domestic terrorists are white; they are male; they are misogynistic; they are typically anti-Semitic; and they hold racists beliefs, often posting their extreme positions on websites and pinboards to share information.

Avoiding stereotypes was the theme of remarks from Frederick Reynolds, global head of financial crime legal at Barclays Bank based in New York, and a former FinCEN Deputy Director, at the annual conference of the Association of Association of Certified Anti-Money Laundering Specialists (ACAMS) in late September, 2020. Whilst speaking in a personal capacity, Mr. Reynolds observed that focusing on stereotypes could obscure other actors, and that, despite the lack of obvious profiling opportunities, some emerging financial typologies he had seen from the work at numerous FI’s might be useful. For example, for homegrown terrorism, FI’s might consider focusing on examining the flow of funds into and out of higher risk charities, where funds could be diverted to extremist causes instead of the charity’s declared purpose. This includes cases where there are financial or physical connections to terror hot spots: financial, in terms of suspicious transfers or purchases; and physical, in terms of charity personnel travelling to or close to areas where jihadist terrorist operations have been identified.

Reynolds proposed a model detecting a process of radicalisation in 6 stages. In the first stage he identified indicators for a higher likelihood of radicalisation to become involved in left or right wing extremism.  The second stage involves changes in life patterns as seen by scrutinising the individual’s financial transactions.  A third stage shows capacity development such as the purchases of items that could be used in an attack. In the fourth stage, attempts are made to cover up their capacity development out of concern of detection.  In the fifth stage, operational capabilities increase intensively, as indicated by financial records of hotel room and vehicle rentals.  In the sixth stage, perhaps in anticipation of dying in the attack, an individual might pay-off loans or alternatively use all available credit. 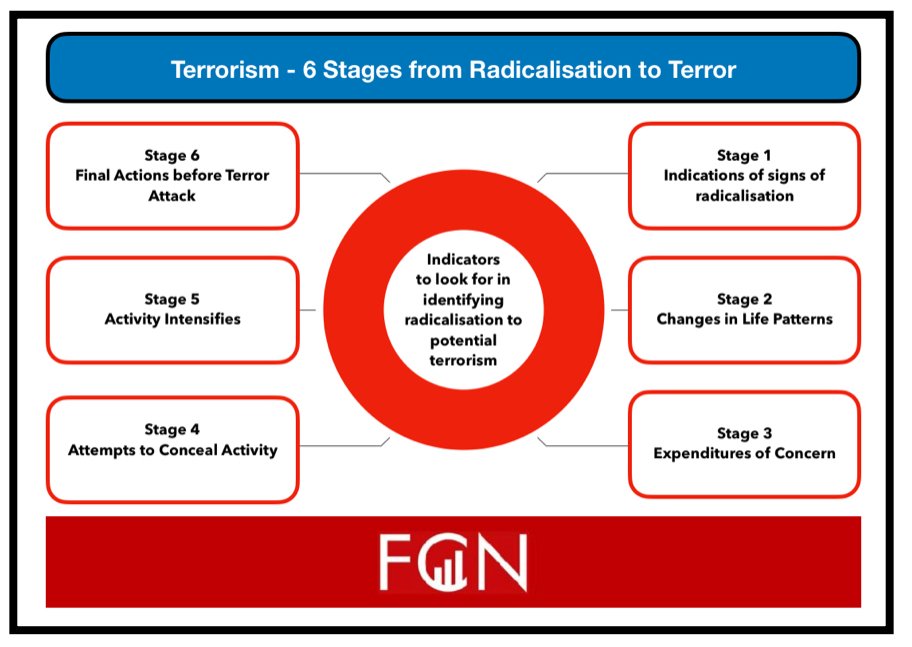 Thankfully, most people who are susceptible to radicalisation or enticed to extremist views never complete all 6 stages, and only go so far as stages 1 or 2. In the rare cases that lead to stage 3 or beyond, financial institution’s that identify such activity will need to contact Law Enforcement urgently, as well as filing SAR’s.

Whilst those filing SAR’s rarely receive any feedback on the usefulness of their SAR’s, given the focus on terrorism within the FBI, and the small number of SAR filings tagged as domestic or homegrown terrorism (around 2,000 annually, less than 0.1% of total filings), filers should be confident that they will be read and evaluated, and as a result could add to keeping all citizens safe

This article was authored by Geoffrey Adamson FCN Correspondent