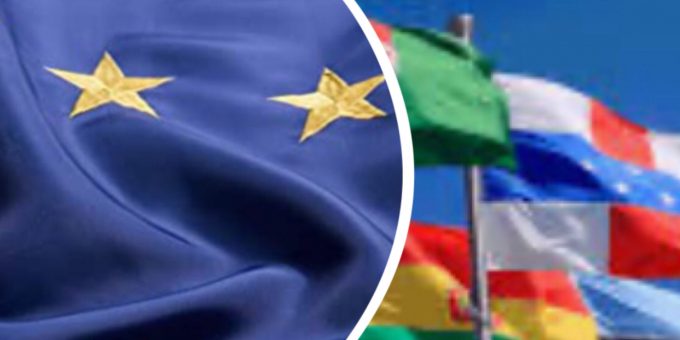 On the 7th May, 2020, the EU proposed a number of third countries to their list of countries whose money laundering deficiencies pose a significant threat to the financial system of the EU, a year after it’s previous attempt was derided by many and withdrawn. EU Member Countries should nevertheless challenge the list as whilst this attempt is better than the last, it still falls short and the grade is must do better.

According to the EU’s 4th Money Laundering Directive (Article 9 (1) of Directive (EU) 2015/849 on the prevention of the use of the financial system for the purposes of money laundering or terrorist financing, as amended by Directive (EU) 2018/843), “third-country jurisdictions which have strategic deficiencies in their AML/CFT regimes that pose significant threats to the financial system of the Union (“high-risk third countries”), must be identified in order to protect the proper functioning of the internal market.”

The 4th MLD (Article 18a) obliges EU FI’s (and other so called obliged entities), “to apply enhanced customer due diligence measures when establishing business relationships or carrying out transactions involving high-risk third countries.”

Early in 2019 additional Countries were proposed to be added, including notably Panama, Saudi Arabia and a number of US territories, which received significant challenge. On 7 March 2019, the Council objected on procedural grounds, challenging the EU Commission that the additional Country selection was “not established in a transparent and resilient process that actively incentivises affected countries to take decisive action while also respecting their right to be heard”. The European Parliament in its resolution of 14 March 2019, called on the Commission to ensure “a transparent process with clear and concrete benchmarks for countries which commit to undergo reforms so as to avoid being listed” and to “engage with the Member States to increase the Council’s ownership over the Commission’s proposed methodology”.

As a result a revised methodology for identifying high-risk third countries, which supersedes the previous one, has been published on 7 May 2020. Its key new elements are an: “increased interaction with the Financial Action Task Force listing process; an enhanced engagement with the third countries; and reinforced consultation of Member States and the European Parliament.”

The EU originally formulated it’s listing of third countries around the concept of equivalence, i.e. similar standards to those adopted by the EU, which effectively meant ML Directives which themselves reflected agreement at FATF where EU Countries and the EU Commission make up by far the largest block of members. The EU listing process has developed so as to identify third countries that pose “a significant threat to the financial system of the EU.”  The “EU methodology focusses on 8 elements: See below. 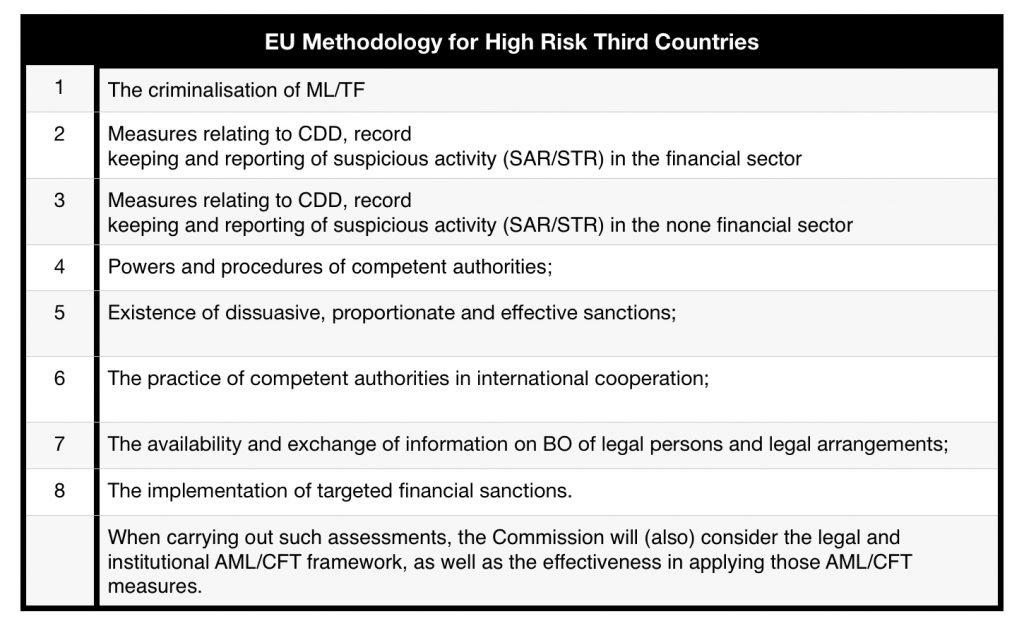 As a result of applying this new revised methodology, the EU has proposed additional third Countries to its existing list and at the same time removed a number of Countries that no longer fit its new criteria. 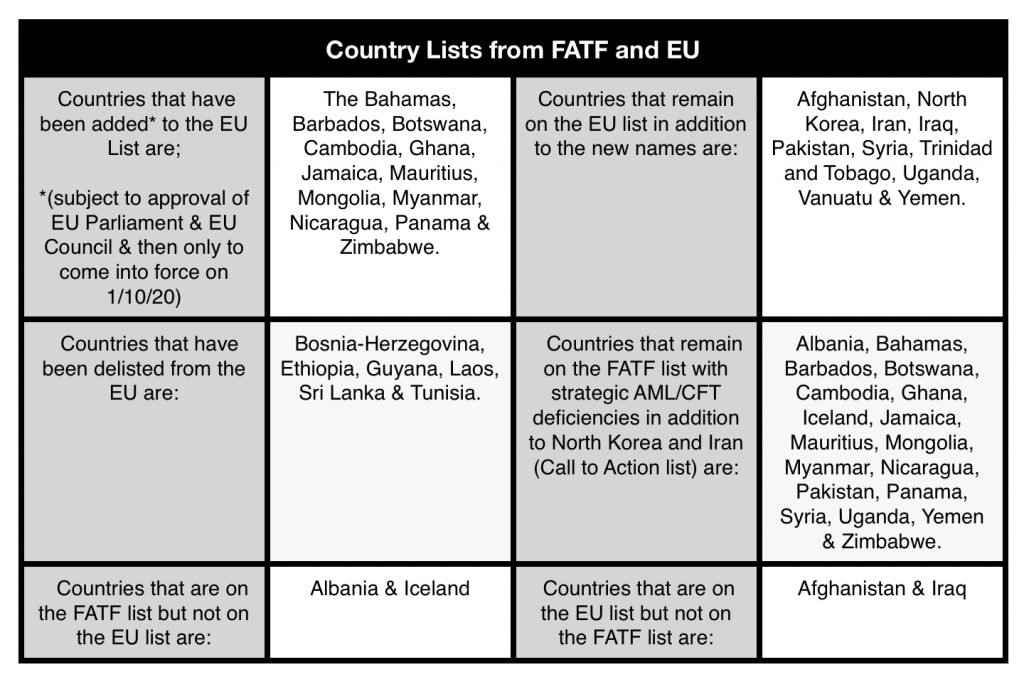 The EU Commission’s proposed “high risk third countries list” is being submitted to the European Parliament and European Council for approval within one month (with a possible one-month extension). Given the Coronavirus crisis, the date of application to newly proposed listed third countries – and therefore applying new protective measures – only applies as of 1st October, 2020. The delisting of countries, however, is not affected by this and will enter into force 20 days after publication in the Official Journal, if approved by the EU Parliament & Council.

There are are a number of positives, that can fairly be attributed to the proposed approach:

There are though a number of concerns that the EU List presents which call into question it’s usefulness.

Rather than a second list that tracks the FATF approach, which rightly considers deficiencies in AML/CTF defences as per the FATF mandate, the EU listing is mandated under the 4th MLD to also do this BUT the intent in so doing is to highlight third Countries, “that pose significant threats to the financial system of the Union.”

The EU Commission has missed an opportunity to do this, with its revised methodology and its proposed third country list, which calls into question the efficacy of this listing process and in particular the results.

Is it really credible for example to suggest that Countries like The Bahamas, Barbados, Botswana, Ghana, Jamaica, Mauritius, Mongolia, Trinidad & Tobago, “pose significant threats to the financial system of the Union.”

Take for example the Countries listed for Sub Saharan Africa; Botswana, Ghana, Mauritius, Uganda & Zimbabwe. These Countries have been included on the EU list, primarily due to their level of AML/CFT response, in particular as identified in Country Evaluations against FATF standards and the status of action plans. Whilst there may be legitimate reasons to highlight their weaknesses, (for example by FATFj, unless the threat is also considered and the net result evaluated, the methodology is going to discriminate against low income, less developed countries. Moreover this is demonstrably unfair where the estimated threat posed both in absolute and relative terms and in particular towards the EU falls well short of meeting the “Significant” standard.

Threats and responses are not the same! Both are important and in many ways responses should be commensurate with the threat, otherwise a skewed, prejudicial and inaccurate result is achieved.

Out of 40 SSA countries where threats and responses have been comprehensively assessed by Financial Crime News, 3 of these EU listed countries (Mauritius, Ghana & Botswana) rank as some of the best in the region (top 10 out of 40), with 1 ranked 20-30th (Zimbabwe) and only 1 (Uganda) ranked as one of the worst) bottom 10 out of 40). This assessment includes both financial crime threats and responses, including results from Country Evaluations against FATF standards.

Whilst the EU List as proposed is unlikely to add additional harms in its new form, (as the new Countries proposed to be included on the EU higher risk Country lists are already likely included on most EU FI’s higher risk country lists by virtue of being on the FATF list) the methodology employed by the EU is prejudicial to less developed Countries, and unfairly targets such Countries, without giving fair regard to what should be the overriding purpose of the exercise, namely to identify Countries “that pose significant threats to the financial system of the Union.” This has the potential of increasing de risking and isolating less developed countries from important developed markets such as the EU.

A more balanced fairer approach would be for the EU, to include a genuine threat assessment into its methodology and to present a net risk overall for Countries assessed supported by capacity building measures and resources allocated to help raise the response. A further step forward would be for the EU to commit to complete an assessment for each EU member and to publish details.

In the absence of such moves, the EU List should be retired. If not a third list identifying where the EU itself represents a threat to third Countries should also be considered if not by the EU then by third Countries themselves.