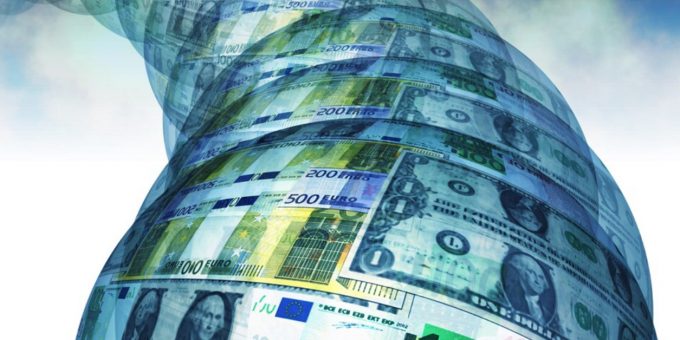 Which Countries generate the most in Criminal proceeds and which Countries are likeliest to launder most, from domestic and foreign financial crime proceeds.

Which money laundering methods are the most popular, and which groups benefit the most?

In this Report, estimates are provided to answer all of these questions and more 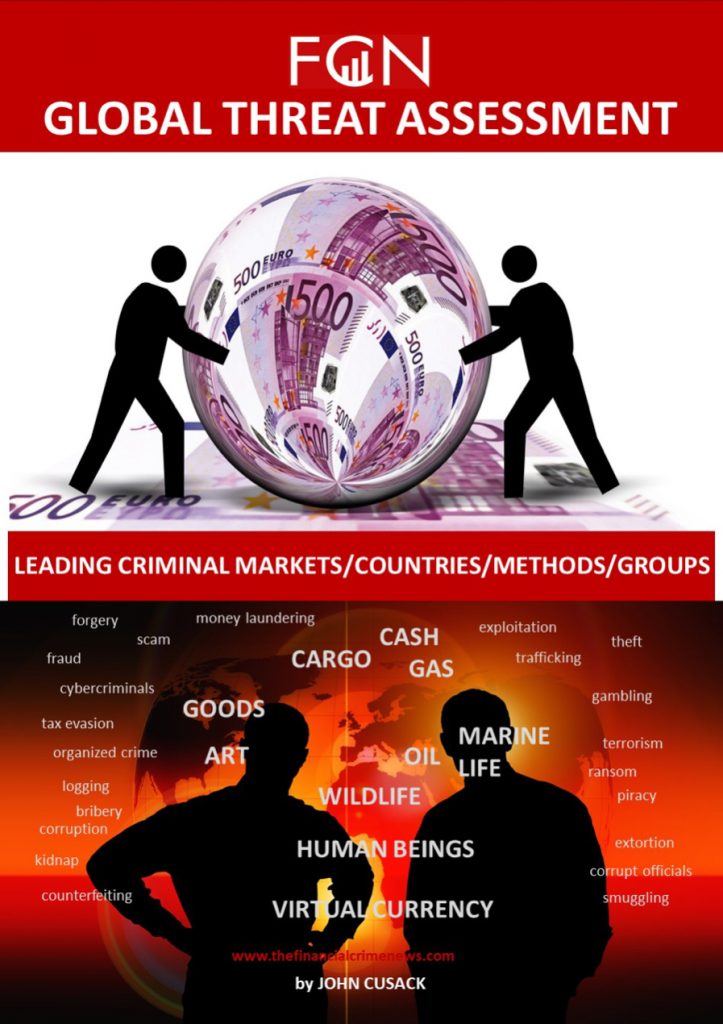 To watch the Video Summary of the main findings from the GTA, click HERE.

To read what Leading Global financial Crime Fighters have to say about the GTA, click HERE.

The last major study that sought to value the amount generated from financial crime dates back to 2011, and was published by the UNODC which reported US$2.1 trillion as criminal proceeds, based on 2019 data, but only estimated a piece of the puzzle.

That followed estimates from 1998 from the IMF which had estimated that the aggregate size of money laundering in the world could be somewhere between 2% and 5% of Global GDP.  Using 1998 statistics, these percentages would indicate that money laundering ranged then between US$590 billion and US$1.5 trillion.

This Report ten years on, presents a comprehensive picture of available values, which can be estimated across activities, countries, methods and groups presenting for the first time a more complete picture of the size and composition of financial crime and how it is evolving.

This Report relies on more than 100 separately published studies and reports and values that have been established to produce a first ever ranking of the largest criminal markets, and by extension likely Country exposures, methods employed and those benefiting the most, with all values representing 2018 values. 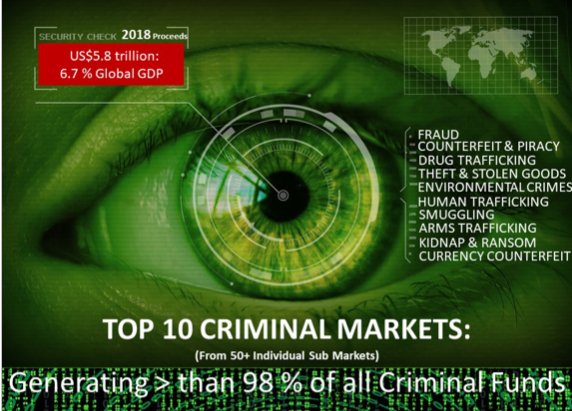 By its very nature, crime operates in the shadows and in so doing avoids accurate empirical assessment, in particular on the size and composition of criminal activity where that activity is being carried out, the laundering of that activity and who benefits.

The purpose of the activity, or the motivation is largely financial gain and those involved willingly flout the law, will not limit themselves to one criminal activity if another can be taken advantage of and will partner with others to collaborate across borders.

Despite the limitations presented in estimating criminal activity designed to be hidden, the results present a bleak picture. Criminal markets are generating more illicit funds than at any other time in our history, with ever more harmful effects inflicted against every country, against billions of people and against our increasingly fragile environment.

It is necessary to therefore ask and try to answer some fundamental questions: 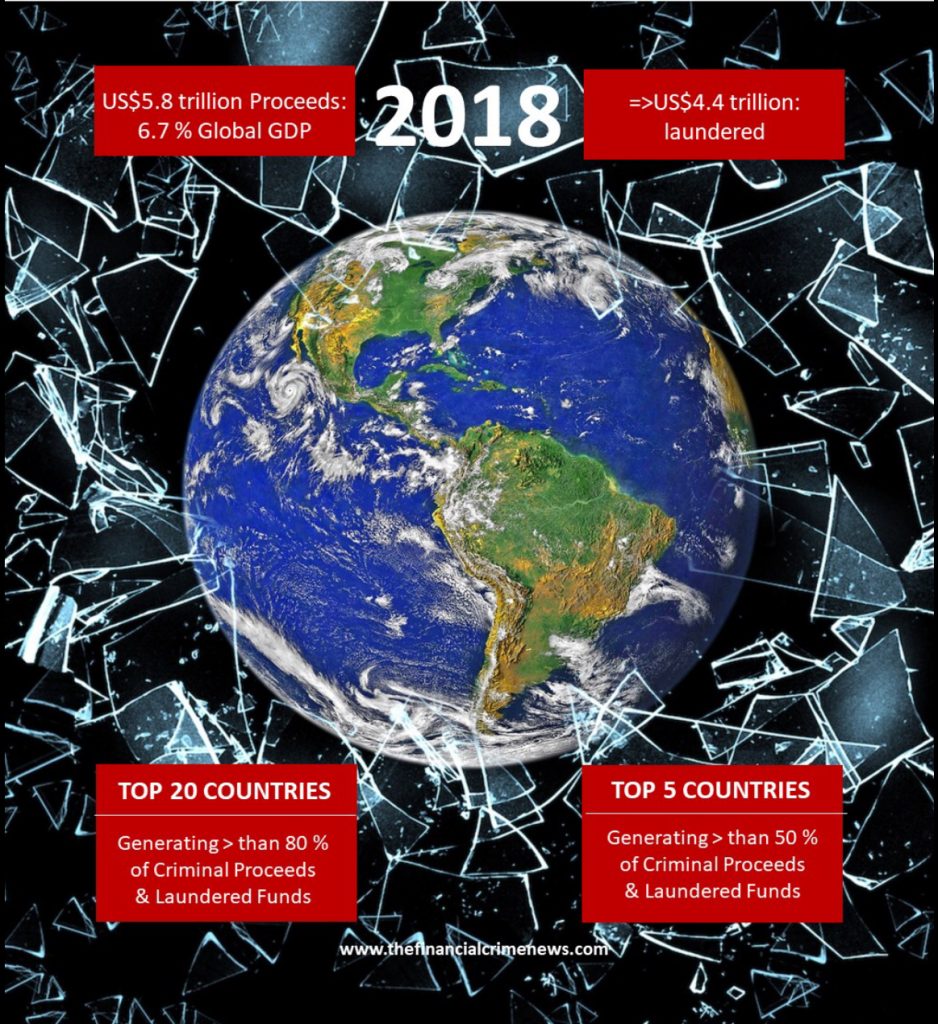 Are we doing enough?

Over many years criminals have successfully laundered funds, exploiting the international financial system, to place, integrate and layer criminal proceeds, with an international task force approach to combating the threat, via FATF having so far limited effects.

The response to the threat has come in the form of Recommendations to Countries to introduce common measures that are necessary to combat the threat and the harms that result. Country Evaluation Results conducted by FATF and published to date are in too many cases disappointing, and reflect indifferent commitments from too many Countries to the task.

Using a simple scoring model, from 75 Country Assessments completed (by May 2019), the average scores are 64% for Technical Compliance with the 40 Recommendations and 31% for Effectiveness or satisfying the criteria applying to FATF’s 11 Immediate Outcomes. In terms used by FATF to assess individual results, (not compliant/low effectiveness; partially compliant/moderate effectiveness; largely compliant/substantial effectiveness; and compliant/high effectiveness) but not overall, you could make a case that if they did, these results could best describe Country results as “Partially Compliant” and “Moderately Effective.” 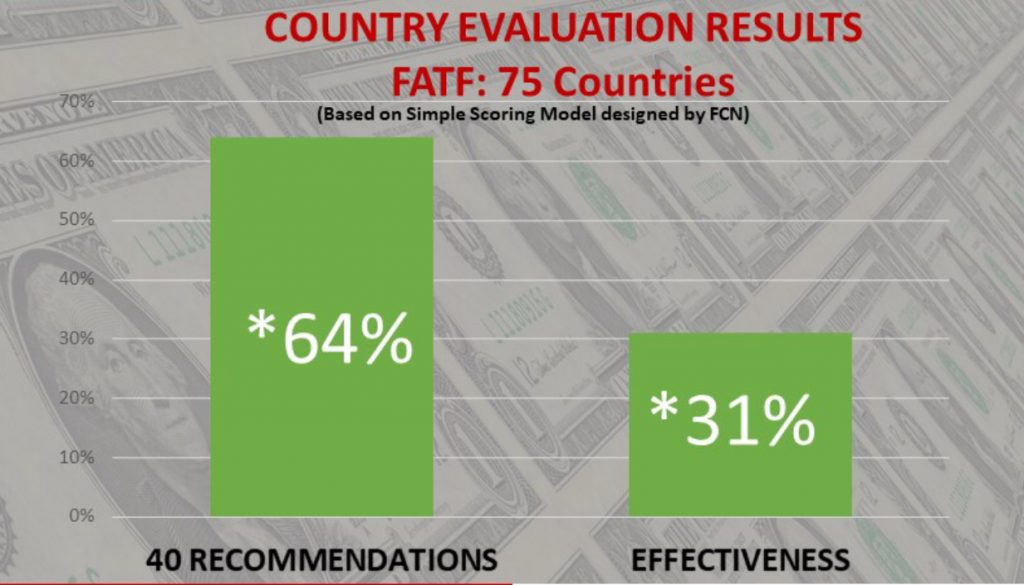 Is what we are doing working?

Whilst the Country Evaluation results should be better, they still suggest a lot has been done, for example on average a new SAR is being reported somewhere around the world every 30 seconds, but despite efforts, we are not yet seeing anything like the kind of outcomes we had hoped for.

Whilst improving technical compliance remains important, more important is to focus on measures that will boost effectiveness.

That we can do better is essential, and it may involve action plans to implement remaining FATF Recommendations, but more likely it will also involve renewing commitments, funding, international co operation and considering changes to existing laws and regulations. 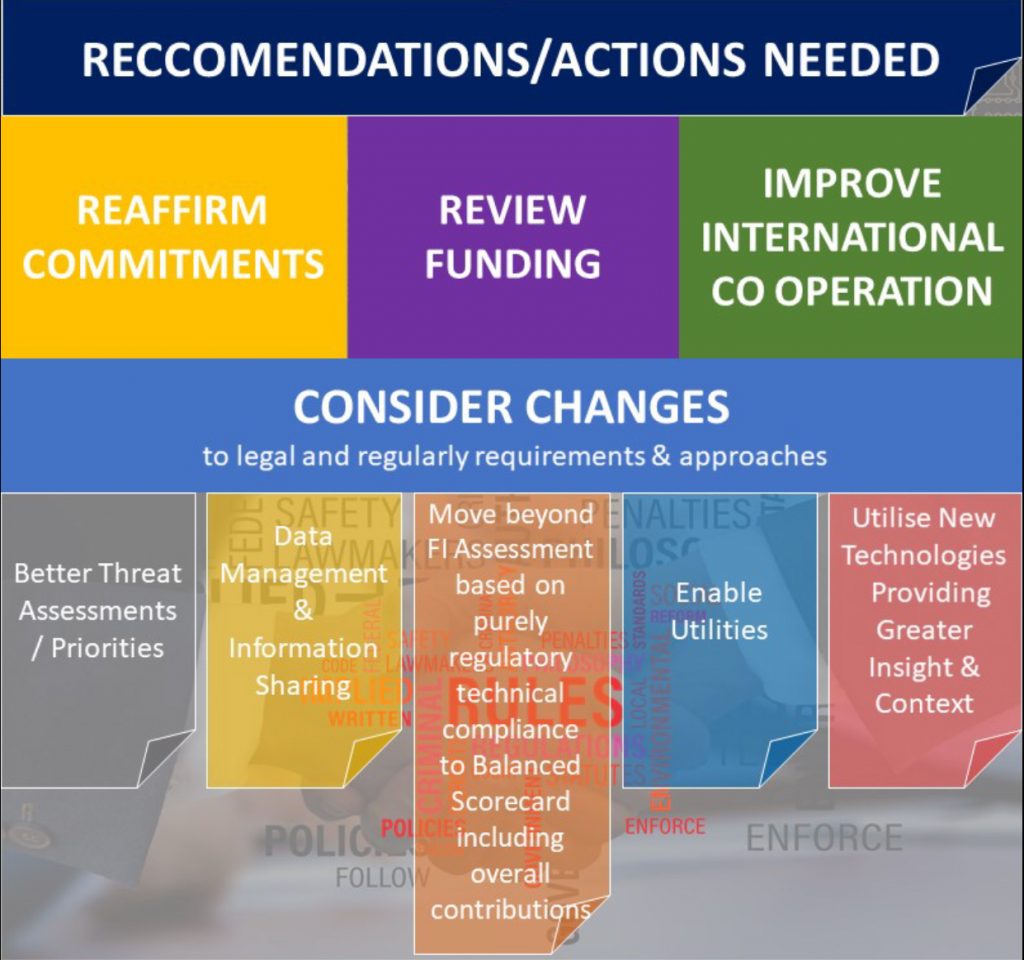 Could we do better?

Those tasked with combating financial Crime, led by governments, including law enforcement, supported by the private sector, can do better, but how?

Country Evaluation scores strongly indicate G20 Commitments, to combatting financial crime are not the priority they appear to be, as words are not translated into all the actions required, reflecting a lack of progress on implementing all necessary measures (for example as required by FATF), but also in addressing corruption, a cross cutting issue as a financial crime itself (but also through facilitation, and enabling avoidance of prosecution or conviction), where progress has largely stalled, with numerous examples of leaders of major Countries implicated, for example Brazil, Malaysia, South Korea and South Africa,

Fighting financial may be expensive, but not doing so is even more costly. Doing it inefficiently and ineffectively is the worst of all worlds. Refinitiv in its 2018 survey, Revealing the True Cost of Financial Crime, reported that selected bank and corporate customers collectively spent an average 3.1% of global turnover over 12 months to prevent criminal intrusion into their global operations, which would equal approx US$1.28 trillion if this was the norm for the private sector across the world.

Taking the UK as an example, the public sector finances the National Crime Agency, which includes the UK’s Financial Intelligence Unit which has an annual budget of £424 million (US$550 million) a year. Lynne Owens, the Head of the NCA believes the public sector is significantly underfunded and in a recent statement, called for a budget increase to nearly £1.1 billion (US$1.4 billion equivalent) a year, warning that, “the UK “can’t afford not to” spend an extra £3 billion (US$3.9 billion) on fighting organised crime over the next three years,” arguing that the threat from drug dealers, cyber criminals, human trafficking gangs and sexual predators was growing “in scale and complexity.”

In the UK, private sector funding has increased substantially, as the bar has been raised on compliance, and fines and penalties have increased. With reports from UK Finance estimating that UK Banks spend more than £5 billion (US$6.5 billion) annually on fighting financial crime, some complain the costs are too high, but most point out that costs are too often incurred in areas that have little impact on effectiveness. The example of the UK is unlikely to be unique. Funding, both in the public sector as well as the private sector is a discussion that has been avoided for too long.

Criminals don’t respect borders and operate transnationally, which is why international co operation is so important and is one of the 11 outcomes that have been prioritised by FATF in their Country Evaluations. Whilst IO 2 (International Co-operation), actually topped the results, with approx 45 Countries reporting positive results (largely effective/effective), the overall effectiveness score is still short of 50%, (IO 7 on Investigations & Prosecutions scored at only 22%, & IO 8 on Confiscations scored at 27%).

Recommended Changes Including to existing laws and regulations
Whilst the costs may appear to outweigh the benefits, at least in purely financial terms, that may not be the right measurement? Just as the war on drugs, is a century old, the war on financial Crime 50 years old and the war on terrorism nearing 20 years old. Just because the results aren’t what was hoped for, or expected, what’s really the alternative?

Legalising cannabis is itself controversial but is not a path that is likely to be followed for other serous financial crimes. So rather than look for an alternative, the better question is how can we efficiently achieve better outcomes?

So whilst not recommending fundamental changes to the current approach, or giving up on the current system, we should recognise it is dated and is not keeping up with either the criminals or the opportunities that are available to raise effectiveness.

In addition to renewing commitments, meeting funding requirements and improving international cooperation, changes to the existing system, which also include legal and regulatory changes, and new approaches for example by regulators and FI’s are urgently needed, as well as from all FI’s which must take full responsibility for having an (reasonable and proportionate) effective Financial Crime Programme, and include those recommendations on Key areas to support increased FI and overall effectiveness, from the Wolfsberg Group. 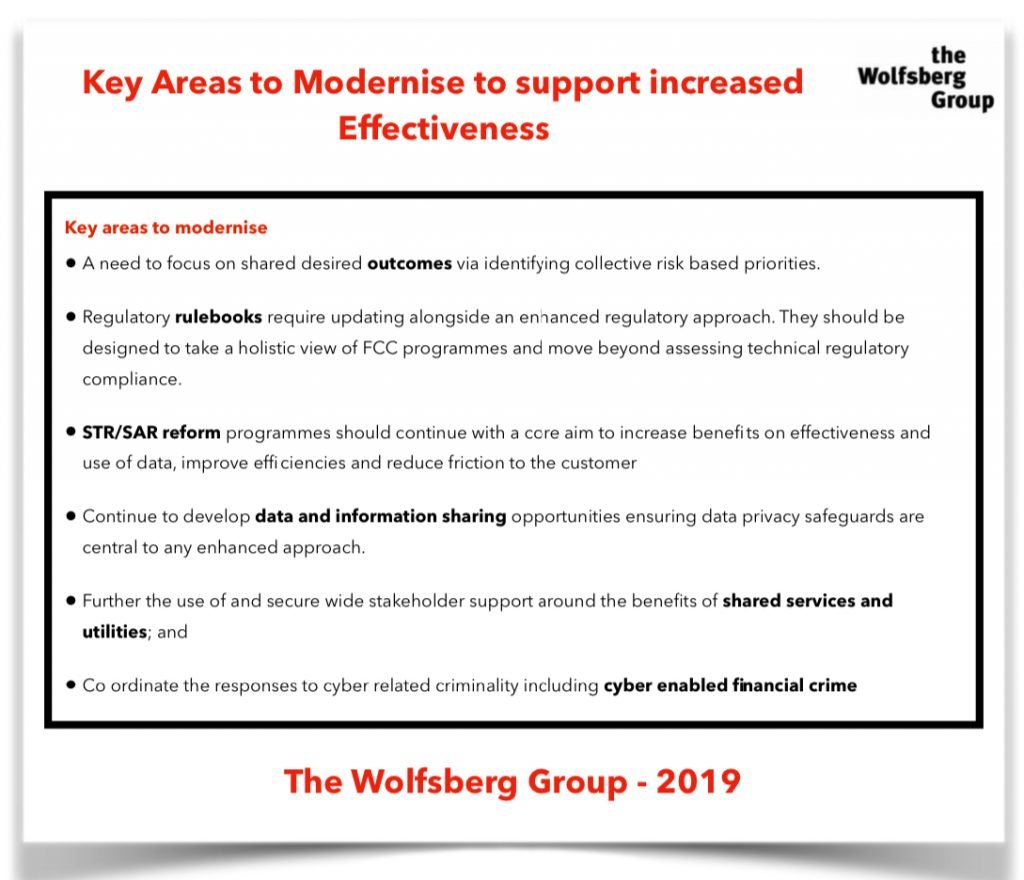 In summary the main overall improvements / changes (incorporating those suggested above by the Wolfsberg Group) needed to turbo boost effectiveness are:

Calls for action by others, with both analysis and recommendations, have also been published that suggest a growing consensus around necessary measure to improve effectiveness including from: 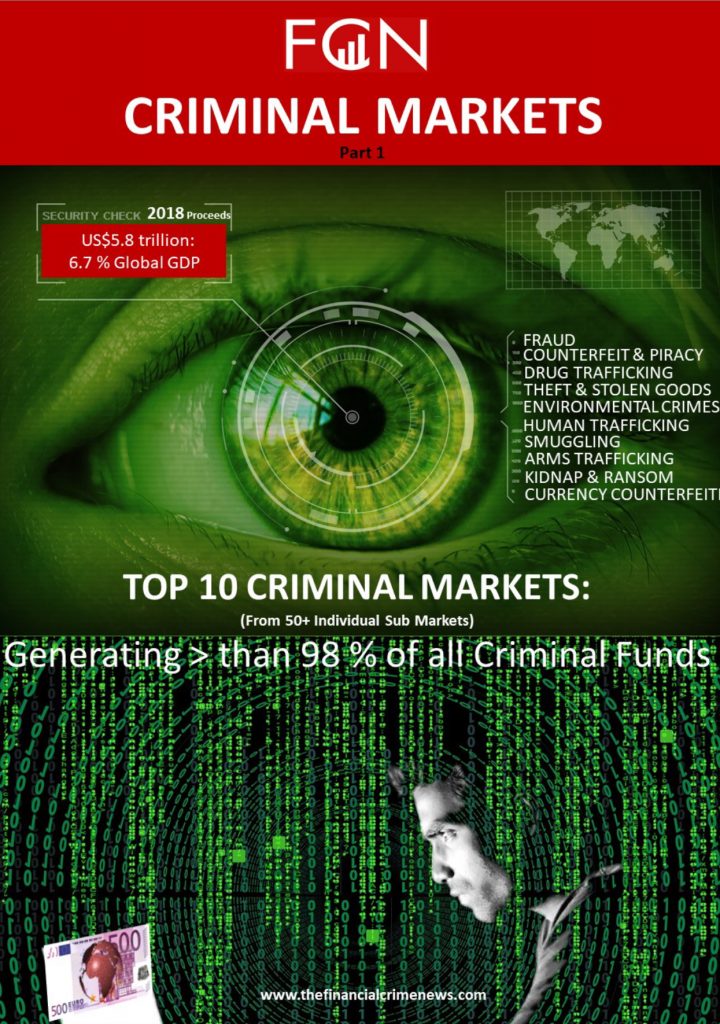 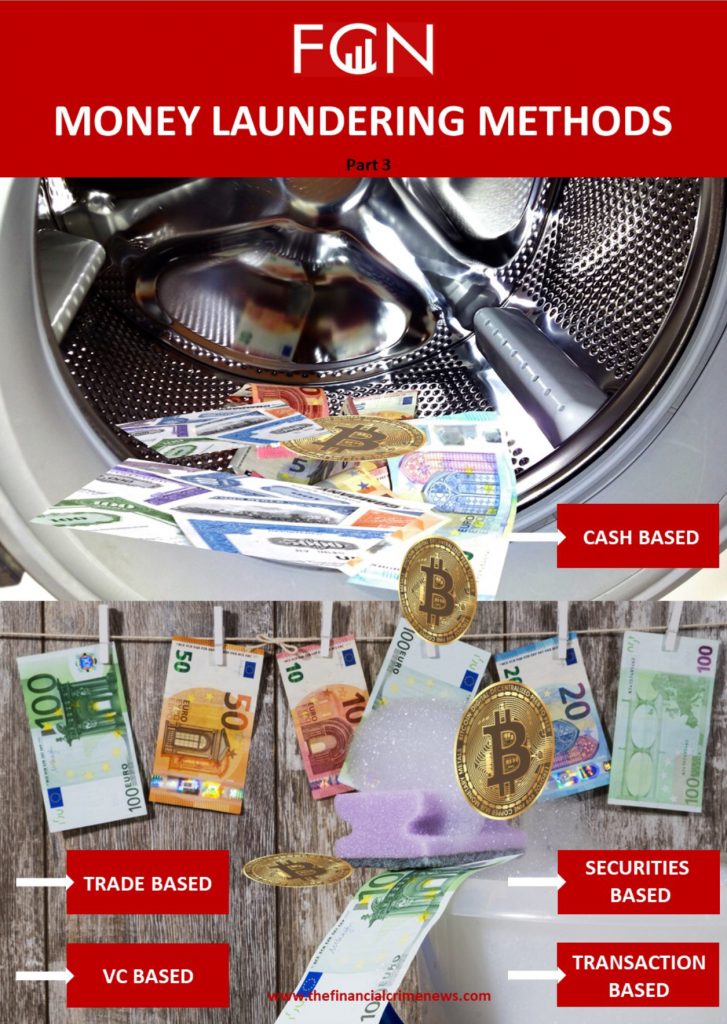 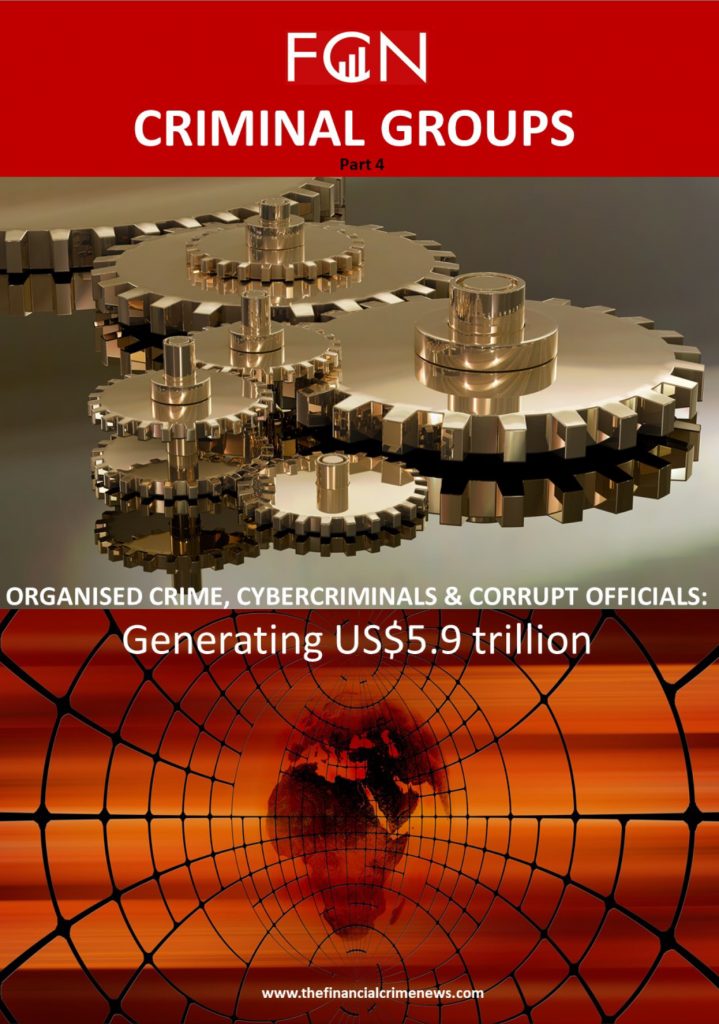 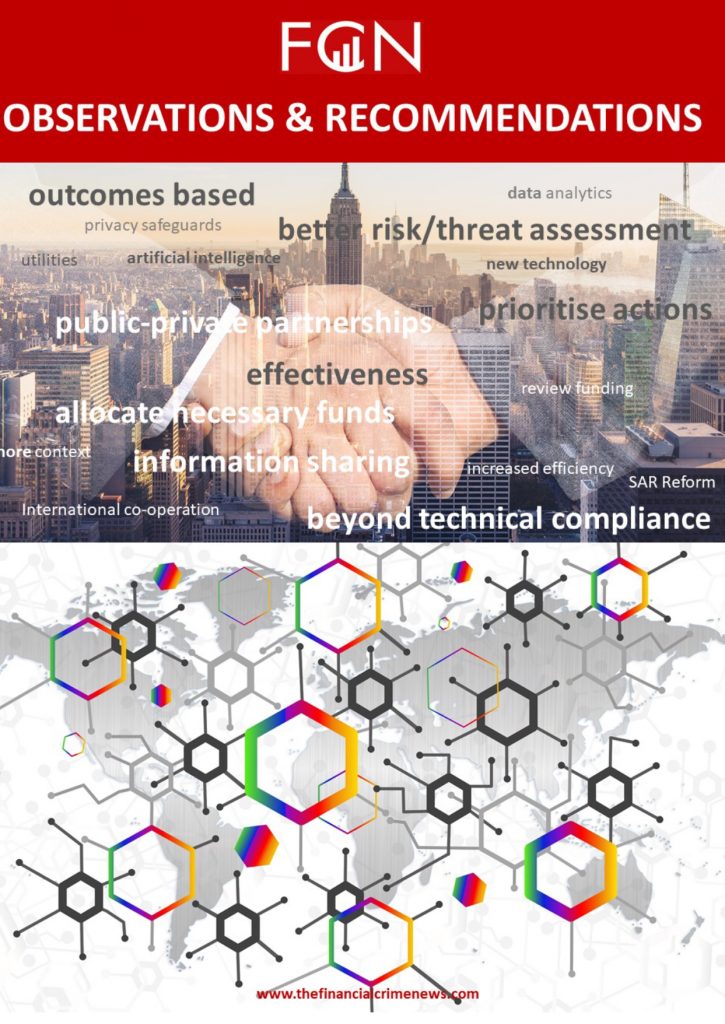 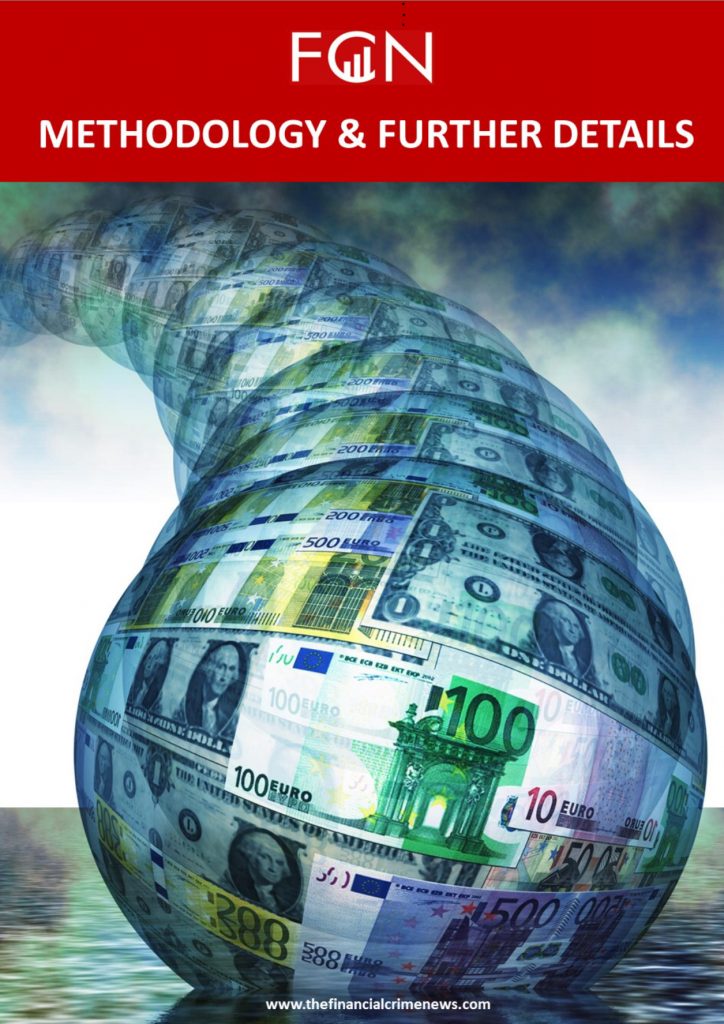 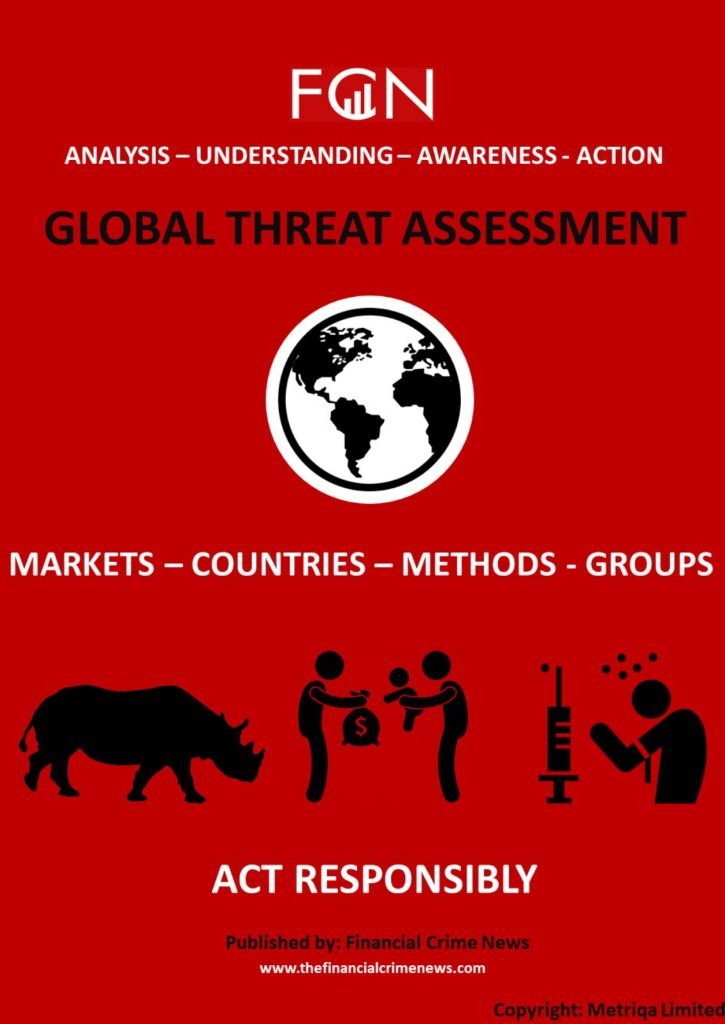