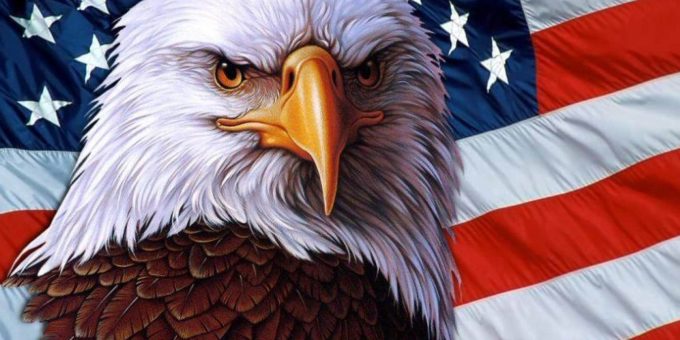 The following is a review of whether the US should be regarded as a high risk country, including the opinion of Financial Crime News, and includes extracts and information from its comprehensive USA Threat Assessment 2022. The TA was produced to provide a digestible, condensed and thought-provoking summary of US ML/TF/FC and PF threats and responses for financial crime fighters to use.

1.1 Introduction: Whether due to its economic size, population, wealth, levels & breadth of international trade or its importance as both a financial centre as well as the US dollar as a global currency, the US is considered to be a ML centre, with hundreds of billions of dollars in financial crimes generated domestically each year. Foreign illicit funds are destined to the US daily to invest in its currency, it’s securities markets or real estate, or is just transiting through the country, (for example via trade and or via correspondent banking). The US is most likely the most exposed country to illicit finance and money laundering in the world.

In December, 2021, US Treasury Secretary Janet Yellen at the Washington DC Summit for Democracy, stated  that, “in the popular imagination, the money laundering capitals of the world are small countries with histories of loose and secretive financial laws. But there’s a good argument that, right now, the best place to hide and launder ill gotten gains is actually the United States.”

Consistent with this admission the US Dept of State, included the US as a “Major Money Laundering Country” in the INCSR money laundering assessment published in March 2022 (INCSR Vol 2), along with 80 other countries.

2.1 Other Sources: The US is also rated by others as follows:

3.1 US as a Higher Risk Jurisdiction – UK View: Whilst the UK doesn’t include the US on any of its high risk third country lists, the same appears true for almost all of those FIs regulated by the UK FCA. In data received from 1,900 regulated entities by the FCA in 2021, only 6 had the US as a high risk country, whereas 70 included the UK. 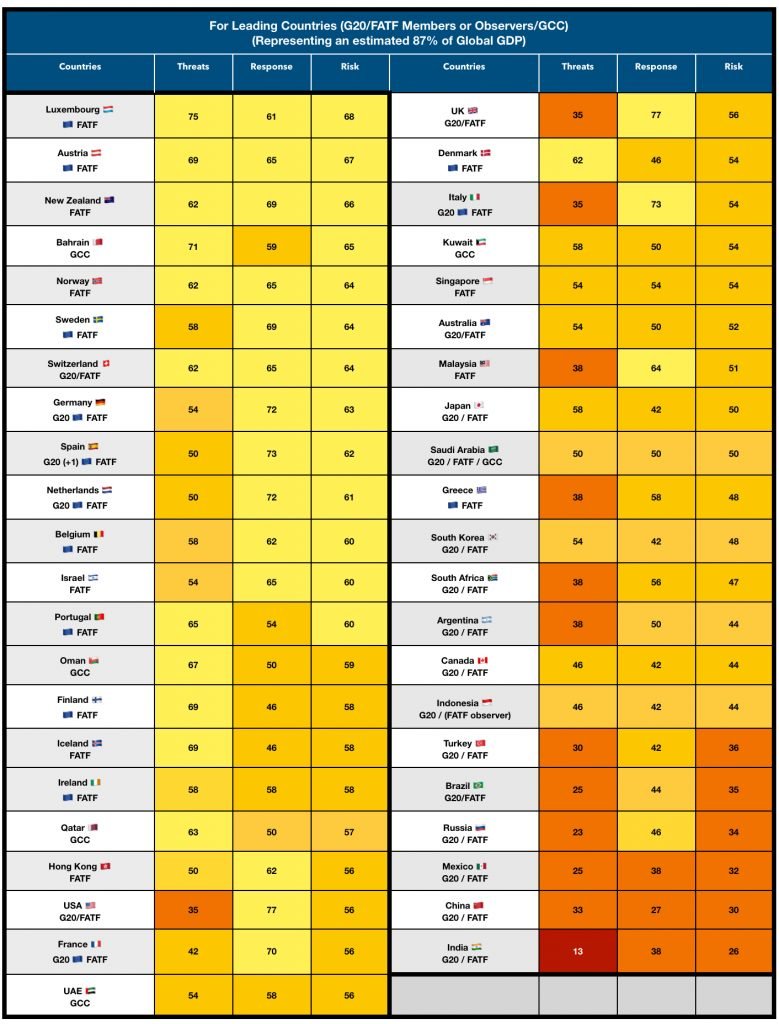 4.1 US as a Higher Risk Jurisdiction – FCN View: The US probably faces the greatest threats compared to any other country. That said, the response is also significant, and reflected in the FATF effectiveness ratings, the OC Index in resilience, and the Basel AML Index.

The FCN Leading Country Financial Crime Index also reflects the higher threat and higher response of the US.  These results put the US ranking mid-table at 21/45 countries. This comprehensive FCN US Threat Assessment highlights in detail the identified threats and the responses based on available information. Based on these findings, it’s unlikely that the US warrants inclusion as a high risk country in a third party’s higher risk country list, more likely moderate risk, though also unlikely low risk. Notwithstanding this, taking note of the particular predicate offences, methods and typologies, routes, sectors and channels used by bad actors should not be ignored.

The US’s recent and timely interventions relating to identified threats do provide some measure of comfort, comparatively speaking in relation to country responses. This is not least because of President Biden’s attempts to refocus and re-energise the US approach to tackling all aspects of financial crime – is welcome and still needed. The Biden Administration has announced new strategies to combat illicit finance, corruption, fraud including cybercrime and cybersecurity, human trafficking and human smuggling, a new drug control strategy and has retained transnational organised crime as a national security priority. 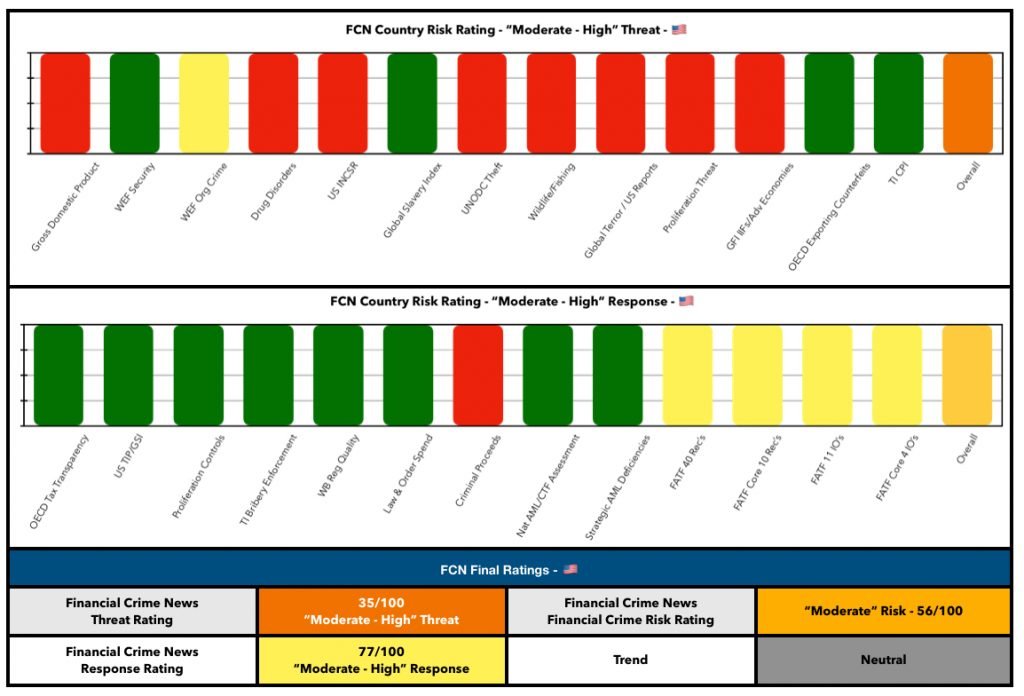 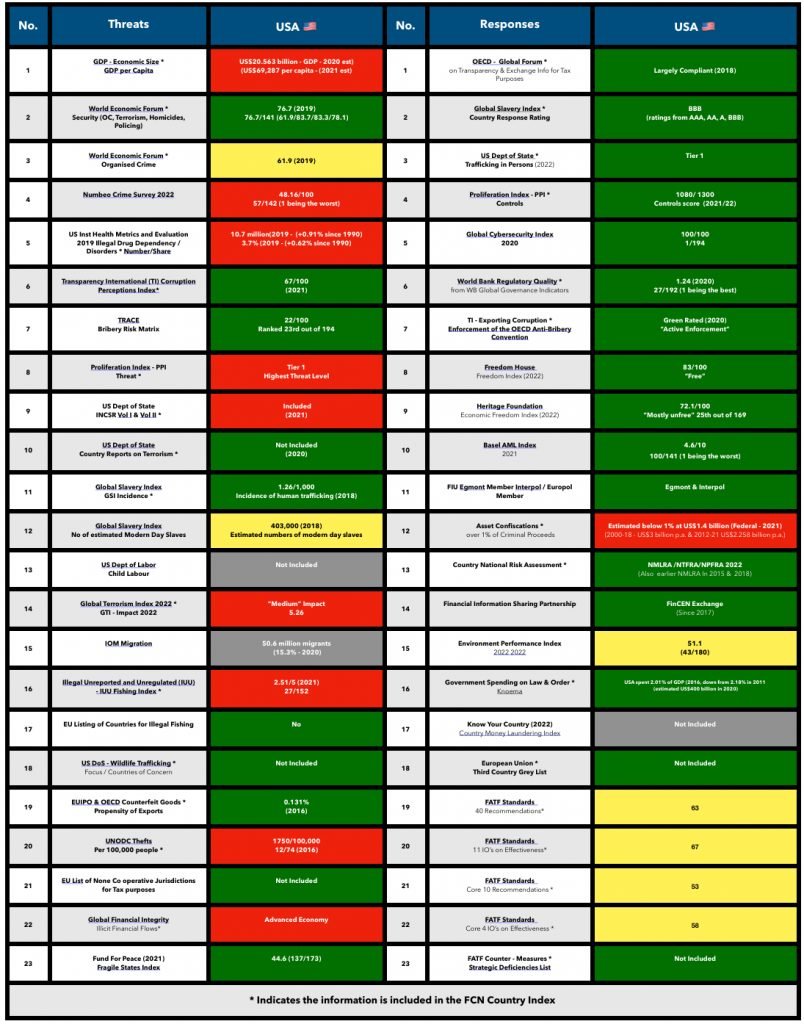 The FCN USA Financial Crime Threat Assessment is packed full of information for all financial crime fighters. To download it See: HERE.

For an OPED (Opinion & Editorial) on the USA fight against Financial Crime based on the research and analysis carried out in this comprehensive Threat Assessment 2022 by FCN see HERE: