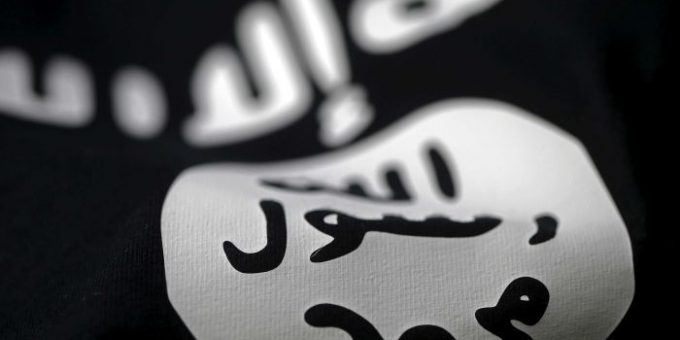 The following is a short summary of the finances of the Islamic State (IS), as taken from a detailed Intelligence Briefing available to FCN Premium Professionals. The 30 Page Intelligence Briefing, details how IS is thought to have raised, moved and stores its reserves to support its terrorist activities and its future plans, a full Threat Assessment, what Financial Crime Fighters can do to help and potential Red Flags and or Key Risk Indicators. See Here For the full Intelligence Briefing.

The threat from the Islamic State (“IS”) remains high, and will continue into the near future, despite the losses on the battlefield both in terms of men and territory. In particular Western Europe, North America, South East Asia, and large parts of Africa are on the highest form of alert with attacks not only expected, but considered highly likely.

This is not least because IS has managed to successfully accumulate a vast amount of wealth from a range of revenue streams during their first attempt at a self-proclaimed caliphate, with strong evidence to suggest that much of this money has been laundered 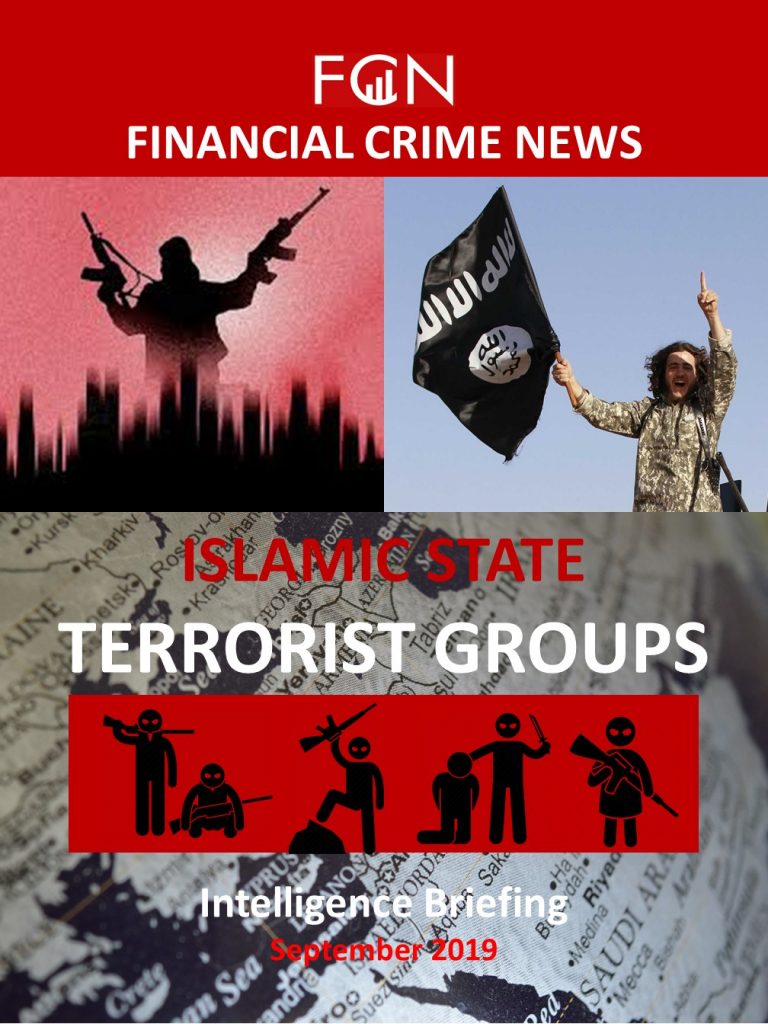 The territorial defeat of IS at the hands of the US led coalition forces in 2019, was a big setback for the group, but IS’s continued access to significant funding, means it’s still the top terrorist threat facing much of the world, and the group continuing to expand its influence in new regions.

With an estimated 15,000 fighters still at large across Syria and Iraq, they are waiting and betting on US troops leaving the region, leaving the Syrian and Kurdish forces behind unable to cope with a resurgence of the group. Freeing fighters being held in prisons, and reuniting them with free IS fighters, will create the conditions for another territorial land grab in the region.

Although they have lost their physical territory across Iraq and Syria for the time being, the groups accumulated wealth from their illicit revenue streams will likely fund the group far into the future. IS leadership have gone to great lengths to secure their financial futures with investments in businesses across the Middle East, and large amounts of evidence indicates some of their wealth made its way through the international financial system and is likely to have been moved several times already.

The group had substantial expenses in administering the territory it held; providing food, water, electricity and other basic necessities to the local population, along with fighters wages. IS is thought to have paid its fighters on average US$350 – 500 per month for example, and with an estimated 30,000 fighters on its payroll during the height of the so called Caliphate, this alone would have represented an estimated US$10 million drain on the group each month.

Their loss of territory and fighters has freed the group from these costs, allowing it to focus on terrorist activity. Oil still brings in some money, although they no longer control oil fields, instead extorting the supply lines across the region.

Some of the fighters left over, who have not been captured and taken off to prison, are openly re-imposing taxes on local populations in their historical support zones, to increase their revenue streams, and continue controlling small pockets of terrain, at least in Iraq. These continuing revenue streams and residual money from the self-proclaimed caliphate are likely to be part of the financing behind the asymmetrical warfare the group are now carrying out across the region.

Despite the extra income still flowing into the group, an estimated US$400 million is thought to be available for future use. The funds are not thought to be hidden as physical cash dumps as these can be stolen or discovered. Instead, they have moved to launder much of their remaining wealth into legitimate businesses in the Middle East.

Raids on businesses in Iraq have traced millions of dollars of IS money through networks with links to Turkey, the UAE, Iraq and Syria. The money has been linked to legitimate enterprises such as real estate companies, hotels and car dealerships, along with a host of other small businesses. These businesses are run by middlemen in the region, who partner with IS, not out of any ideological sympathy, but for profit; sending revenue back to the group when needed.

Funds were moved in a number of ways, including via the Iraqi al-Rawi Network which operated for years as a Money Services Business, with connections that spanned the Middle East, Africa, and Europe. Turkey was heavily relied on to move money across the network, with many IS assets transferred to the country and held in cash or invested in gold or moved via the international financial system. Turkey has also been accused of buying cut-price oil from the group, raising millions of dollars for IS, an activity they heavily deny.

IS money, wherever it is being held or laundered, will most likely be used to allow the core group to survive, regroup and continue to plan their next strategic and tactical moves to build an Islamic State.

The fight to tackle the groups influence and capabilities long term cannot be defeated by military might alone. Disrupting and degrading terrorist financing networks is essential in order to combat the threat from IS in the long term; disrupting their ability to launch attacks, stop them from re-gaining territory, hinder payments to their fighters and families, reduce their operational capability and create uncertainty around their capability. All of this will reduce their support, morale, leadership and legitimacy long term.

The long term strategy for wiping out the group and their support network will lean on FI’s and their ability to stop IS money heading back through the global financial system; helping to identify it and stop it being layered or moved into jurisdictions that make it difficult to identify the source or beneficiary of the funds.

Governments will need to work closely with FI’s to deny the group access to the money laundered, particularly identifying transactions, accounts and transfers that may look legitimate, via sanctioning IS–linked businesses and denying them access as far as possible to the financial system.

Although the political stability across Syria and Iraq remains fragile, it is likely IS will try to regroup and spread it’s influence in elsewhere to areas where other terrorist groups have pledged allegiance, for example in Libya, Egypt, Saudi Arabia, Algeria, Somalia, West Africa, East Asia, Afghanistan, Pakistan and Yemen and or regroup in these areas with the AfPak region considered the most likely. 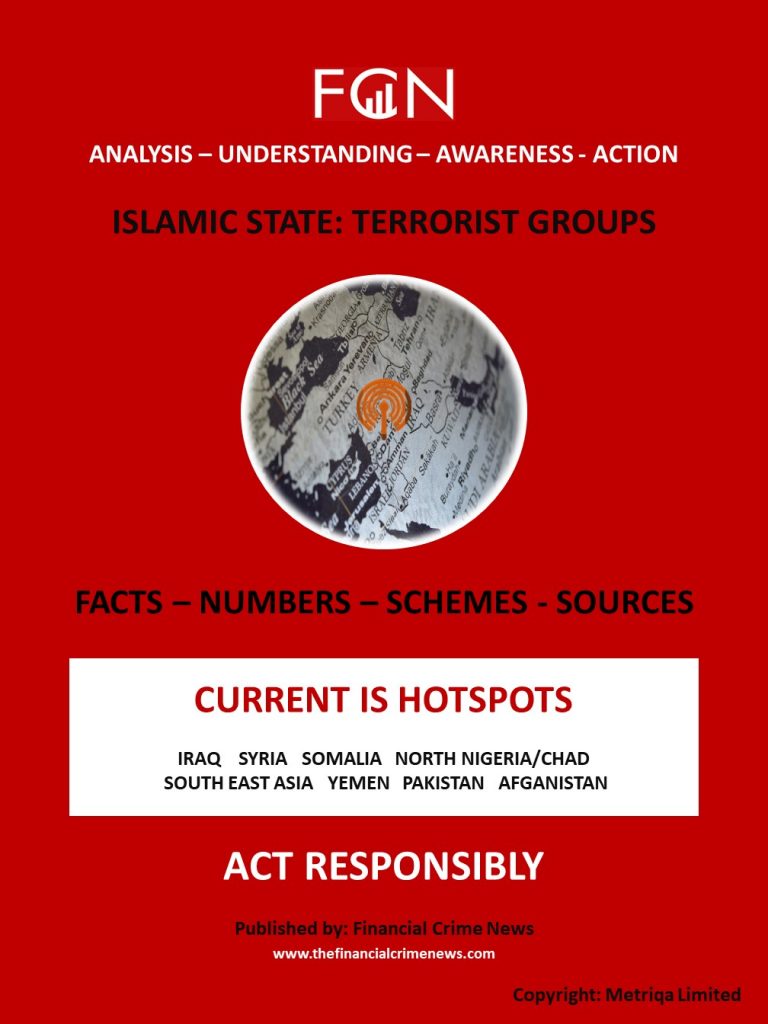 Thanks for sharing good .