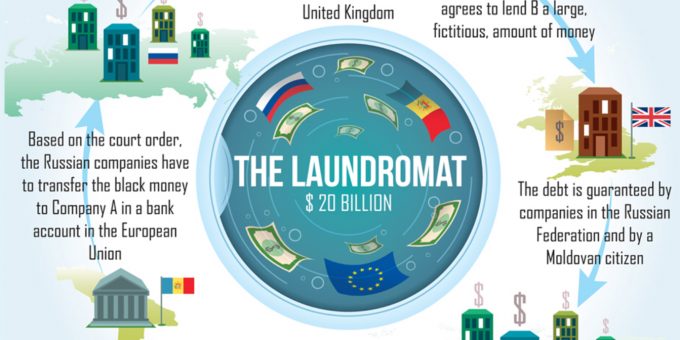 So called laundromats, like the Russian, Azerbaijani and Troika laundromats are making headlines, tarnishing once stellar reputations, and leading to serious questions about their prevalence, how they operated and for so long, why more wasn’t done and what lessons can be learned and actions taken to prevent these laundromats from washing dirty money in the future. This article on laundromats, provides an explanation and commentary on these matters.

These laundromats, are neither discreet events nor simple in construction. Indeed, the very reason they are referred to as “laundromats” rather than simple “money laundering” examples is indicative of a professionally run business rather than a one off event.  They do not represent the efforts of corrupt politicians or organised criminal gangs laundering the proceeds of their own crimes, rather they are run by separate, professional money launderers who, for a fee, will clean up ill-gotten gains for just about anyone.

Russian money laundering comes in many forms, whether it is the Russian Mafia, corrupt politicians, crooked businessmen, or even traders or citizens wanting to put money overseas without any questions asked, they can turn to those that run the laundromats, and once the money is washed, the money can then be used to buy homes in London, Yachts moored in the Mediterranean, jewellery and fashion, acquired in Paris or even a passport from Malta. Unfortunately, a simple “placement, layering, integration” approach just won’t work for the huge sums involved, hence the need for a full scale “laundromat” operation. If you are going to run a successful “laundromat”, you need:

With illicit financial flows from Russia and the former Soviet States, estimated to be in the hundreds of billions of dollars, after the break up of the Soviet Union, these outflows represent the proceeds of crime, corruption, and tax evasion, on a huge scale. In order to clean all this dirty money, industrial size laundromats are being used.

With so much money to be washed, the only industrial way of laundering this much money is via a skilled business operation. Establishing sufficient retail accounts, or herding enough “mules” would require an enormous effort and would likely raise too many obvious suspicions, particularly as the amounts required to be laundered would not look right through retail individual accounts. Therefore commercial companies, purporting to be involved in cross border activities, are the obvious choice. Whilst the numbers of Companies, even in this operation were significant, the Laundromats were able through their “administrators’” to retain control of all these companies so that the money is also controlled until the washing cycle is completed.

Another feature of the Laundromats is that they generally avoided direct exposure to the bigger banks, wary of their increased capabilities. That meant introducing the bulk of the funds initially into the system through small, regional banks where their systems were less developed and or they were less interested in the sources of the funds. In some cases, it is also believed that money also changed hands, accepted by some Bank staff not to ask too many questions. Once one Bank had taken the bait, it was then not that difficult to get the money moved via Correspondent Banking accounts, to intermediate and then final destinations. As a number of the smaller and regional Banks were based in the EU, for example in particular branches or subsidiaries in the Baltic Countries, subsequent transfers via the EU, was relatively simple.

The Laundromats used their networks of companies, so that funds moved quickly, avoiding significant credit balances being created, though turnover was significant. The use of a large number of UK and, to a lesser extent, New Zealand companies (as well as Hong Kong, Cypriot and others) at the heart of these schemes, had the advantage of being relatively easy to set up whilst providing a veneer of respectability. However, looking more closely, you can see that for each of these companies, whether they be Limited Companies, Limited Liability Partnerships or, uniquely for the UK, Scottish Limited Partnerships, they would nevertheless still be owned by other legal entities registered in far off places which are famous (or notorious) for the levels of secrecy they accord to company registrations.

There are many lessons to be learned not just by those caught up in these scandals but by everyone involved in combating the laundering of dirty money. Specifically for Banks, beyond ensuring robust KYC for each individual account, Banks should consider how they identify potential links between remitting, receiving and onward transmission accounts, identifying common ownership or control, common registered addresses, volumes and not just balances, revenues generating accounts or branches or other factors which might just be the first indication of another laundromat at work. That’s important because, if one thing is certain about these laundromats, it is that we haven’t seen the last of them just yet.

In the case of one of the smaller regional Banks, that got involved, and subsequently has seen its Chairman, CEO and others leave, it became the subject of numerous investigations and seen the value of the company’s stock reduced by US$ billions. Whilst Danske Bank, through its Estonia Branch is seen as the poster child for getting it badly wrong by processing over US$234 billion (€200 billion) of potentially suspicious funds on behalf of thousands of non-resident customers, mainly from Russia and former Soviet states.

Having reviewed a huge cache of bank statements they revealed that a large number of UK LLPs were involved in this activity many registered to the same address with the same two designated members. In other words, they were under the control of the same people. The bank statements clearly showed those people moving large amounts of money between the accounts of these LLPs, often repeatedly, to confuse anyone looking at the money trail, prior to reintroducing the funds to the recipient, well washed. Some of these LLPs also maintained accounts with many other banks located elsewhere, for example Swedbank or Nordea. Repeated transfers round the Laundromat (the “rinse” cycle) makes it almost impossible to establish how much of the potentially suspicious activity is the original “dirty” money and how much is just the same money being double or treble counted.

However, what is abundantly clear is that some of this money has ultimately ended up in accounts in just about every major bank, in just about every country in Europe. Of course, the further through the laundromat the money has travelled, the harder it is to spot that it is connected to once dirty money.

You can learn more about Laundromats by either listening to the weekly podcast “The Dark Money Files” by Graham Barrow and business partner Ray Blake, which explain to a non-technical audience how “Dark Money” (e.g. money laundering, corruption, bribery, tax evasion) enters the financial system and infects everything it touches, or by reading about laundromats, money laundering and the use of corporate entities at Graham’s own website.

The Organised Crime & Corruption Reporting Project (“OCCRP”), have revealed a number of schemes, or so called “Laundromat’s,” including, the Troika, Russian & Azerbaijani Laundromat.

The Troika Laundromat, named after a former Russian investment Bank, was revealed in 2018 and operated between 2007 and 2015 moving almost US$5 billion out of Russia. The Laundromat wasn’t just a money laundering system. It was also a hidden investment vehicle, a slush fund, a tax evasion scheme, and much more.

The Russian, Moldovan or Global Laundromat as it has been variously called was a scheme that moved US$20–80 billion out of Russia, between 2010 to 2014 through a network of banks, many of Russian Laundromat them in Moldova and Latvia, established by a wealthy Moldovan businessman and former MP, who was sentenced to 18 years in prison in 2017.

The Azerbaijani Laundromat operated between 2012 to 2014, facilitating the transfer of US$2.9 billion out of the Country, with suspicions that much of the money may have come from those connected to the family of the President, as well as government ministries and other insiders.